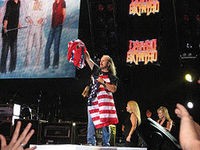 The extraneous requesting of Lynyrd Skynyrd's "Free Bird" is one of the longest running jokes in rock and roll history. It also ranks among the least funny. Each time a lazy heckler yells "Free Bird" at a rock band, a lose-lose situation results. The band is mocked and the heckler gets away with one of the worst act of douchebaggery. But the biggest victim is "Free Bird" itself. The phenomenon has cast such a stigma on the song that many can't hear the song without thinking of the heckle, just like the way "Pink Moon" by Nick Drake has been marred by that Volkswagon commercial. With Lynyrd Skynyrd in town tomorrow, we are here now to rescue "Free Bird" from heckler hell.

Nothing about Lynyrd Skynyrd's most dynamic tune qualifies it for use as a punching bag. "If I leave here tomorrow, will you still remember me?" Ronnie Van Zandt asks (or, post plane crash, his younger brother Johnny).

The opening question is the vulnerable setup to a somber meditation on freedom. He sounds less excited singing "I'm as free as a bird now" than the lyric commands, and the lethargic beat encourages introspection. On the surface, "Free Bird" is not party material until after its second chorus. The tempo increases and the chords rev up, rendering a badass solo inevitable. Guitar World Magazine rated Allen Collins' wailing on "Free Bird" the third best guitar solo of all time; if so, why aren't lame audience members yelling "Eruption" (number two) or "Stairway To Heaven" (number one)? Or why not yell "just play the second half of 'Free Bird'?"

And what does the heckler expect as a reaction? It is doubtful that they want the band to actually play the song; it's likely, given the inherent ignorance and frequent youth of the heckler, that they've never actually heard the song. If they had, they'd know how powerful "Free Bird" can be.

Its searing solo section was used to great effect in Forrest Gump, when a heroin-induced Jenny contemplated suicide on an apartment ledge. The song was a beautifully appropriate ending to the final episode of Conan O'Brien's stint on The Tonight Show. "This bird you cannot change," sung by a hippie Will Ferrell with a hodge-podge band including O'Brien, Beck, and ZZ Top's Billy Gibbons, was the perfect middle finger to the NBC execs who canned the eclectic host. And the award for most punk rock execution of "Free Bird" goes to Built To Spill, who responded to the consistent heckle by playing the song in its entirety at its shows.

I will admit that there are possible, if unlikely, instances in which the "Free Bird" heckle could be funny. The implied joke is often its inappropriateness, yelling one band's song at another's concert. With this in mind, the more extreme the disparity between the situation and a Lynyrd Skynyrd show, the better the chance of legit humor. Maybe yelling "Free Bird" at one of violinist Shoji Tabuchi's Branson dates? Or a Catholic mass? Maybe shouting "Free Bird" at funeral protesters from the Westboro Baptist Church? And if the gesture is a matter of rudeness, be more specific. Request "Paranoid Android" at Coldplay, or rattle off Velvet Revolver songs at Guns 'n Roses.

Perhaps the most thoughtful burn would be "Free Bird"-ing Neil Young, who wrote the awesome "Southern Man" as a diss track to Skynyrd, who replied with "Sweet Home Alabama," which sucks. But Neil Young has certainly heard that joke before. We all have. Lynyrd Skynyrd has, and they'll certainly hear it tomorrow at the Family Arena. It's the one instance in which the "Free Bird" heckle is acceptable, discounting performances by the Long Island based Lynyrd Skynyrd tribute band Free Bird. In every other situation, we can frown upon the behavior but that will not make it stop. It's a free country, and this bird you cannot change.