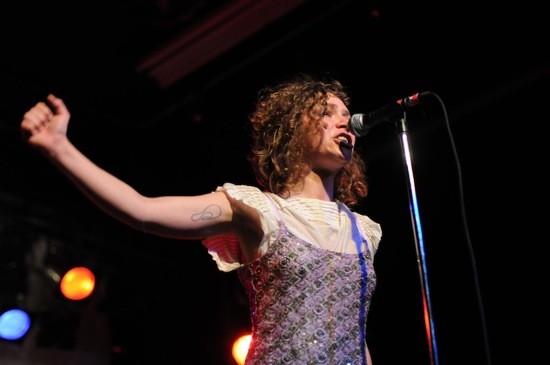 There are no giant signs signaling to passing cars "stop here" at the Firebird But there it is, a speck of life surrounded by boarded-up buildings and corporate sky rises. The Firebird, like Company of Thieves, is unexpected but welcomed.

Touring with its second album, Running From a Gamble, the band has changed since the release of its first album, Ordinary Riches in 2009. Songs like "Oscar Wilde" seemed to serve more as a showcase for Genevieve Shatz's powerful voice than the work of a fully formed band. But this latest album offers a much more polished and complete sound. Of course, one thing has stayed the same -- Shatz remains a riveting stage presence.

With the other original band member, guitarist Marc Walloch, by her side, she was almost a show in herself. She backed away from the microphone as the band kicked off the first song. Fists pumping, foot stomping, her body pulsed with energy. One moment she was banging on a tambourine and the next she was shouting into a megaphone. This is what makes Company of Thieves so much fun to watch: it plays with a passion that's palpable.

Genevieve sang her way through several new songs off Running From a Gamble before dipping back into crowd favorites like "Pressure." This is one song that really demonstrates the strength of her voice. She's got the scratch of a smoky jazz club in the back of her throat, but her vocals are much too powerful for that stage. As the song winded down the band stopped playing, leaving Genevieve alone with the mic. The audience was silent and riveted as she belted out one last line.

Returning to the stage for the encore, Company of Thieves played the song that serves as the band's anthem, "Won't go Quietly."

"It sums up the whole darn thing," said Shatz from the stage.