Bo & the Locomotive Triumphantly Return, Having Only Slept On Cat-Piss Couches Once 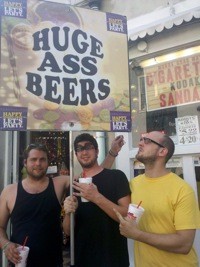 Bo & the Locomotive is gearing up for the release of its first full length, On My Way; it's out July 30th. The band is, in fact, exactly on its way, having just returned from a tour that took Bo and his band through the South. There were especially successful shows in New Orleans and Austin, camping in Florida and that cat piss was in Houston. These sorts of relatively short tours are the best and worst thing about playing in a band with aspirations for an audience outside St. Louis. It's a chance to meet other people in your shoes, hone your show and get music into fresh ears, but it also tends to require some marginal problem solving for basic necessities such as food and shelter.

Front man Bo Bulawsky went through the highlights, the lowlights and lessons and shared some snapshots from the road.

Kiernan Maletsky: What did you travel in?

What was your cheapest meal?

Well there were plenty of free ones, including pulled pork sandwiches, boiled peanuts, many varieties of pizza, homemade biscuits, and Pita Pit. But the cheapest meal we ate using our own money was probably a pack of hot dogs and buns that we cooked while we were camping on our day off in Florida.. dipped in honey mustard.. amazing.

Which venue treated you the best?

That's a toss up. We were consistently impressed and shocked at the level of generosity towards us, southern hospitality I suppose. But there were a few standouts, the Underbelly in Jacksonville bought us dinner, we drank for free, and they gave us a place to stay. Skinny's Ballroom in Austin has probably the nicest and coolest staff/owners, they were amazing. Rogue Pizza Company in Fayetteville was good to us too, free pizza, good pay, cheap drinks..

Where did you sleep?

We had places to stay every night except for one, we got a room at the Super 8 in Fayetteville for 60 bucks. Other than that, we pretty much had connections in every town with at least a couch or a carpet. We slept inside the venue in Houston, they locked us in and we slept on their cat piss scented couches.

Who was the most interesting person you met?

There were many. Tyler in New Orleans from the band Sun Hotel put us up and got us our show with his band (which was in a funky modern day speakeasy, you could call it.. it was amazing). He was so accommodating and friendly, we couldn't help be infatuated with him and band and the city of New Orleans. There was also the entire staff and black hole twilight zone of a venue called Super Happy Fun Land in Houston. There is something in the water in that town..

What was your best show?

My favorite was at Breezy's in New Orleans. It was sort of like time traveling 75 years into the past without actually going anywhere. It was old and weathered and the crowd gathered nicely and payed close attention. The venue was tiered and the band plays at the lowest tier with everyone looking down at you, it was beautiful. Skinny's in Austin was also a good one, you can see some videos from that show.

What was your worst show?

Definitely Dallas. We played at a coffee shop called Opening Bell. There were six people there including the staff and the jazz trio that played for two hours straight after us and talked through our entire set at the table directly in front of the stage. The one guy in there listening to us came up to the stage after our second song, told us it was a great song, and then left.

What did you bring with you in the way of merch and music, and what sold best?

We were selling our first EP, Golden Arms on CD, and the On My Way cassette tape, which has two new songs on side A from our debut full-length called On My Way, coming out July 30th, and two previously unreleased bedroom recordings on side B. We sell everything for donation, so if people donate a lot for one we'll just give them both. It works out well. The tapes sold surprisingly fast, but we sold more CD's overall. They need to make a tape deck to iPod synchronizer.

What was the best band you played with?

I really liked Jane Jane Pollock from Tallahassee, although we played with them in Jacksonville, not Tallahassee. They put on an awesome show, and all six of them were great at at least three instruments. It was impressive and I'm glad we made friends with them.

What piece of advice do you have for other bands heading out on tour?

Find the right bands to play with you, it can make all the difference. And Gold Bond Medicated Body Powder.

What did you give up in order to go on this tour?

70 or so hours of cooking pizzas in a hot kitchen, one bartending job and one Skekses show.

What did you gain on this tour?

This tour was uncharted territory for us, we hadn't played in any of the cities we went to. So I suppose we gained some idea of which cities to hone in on and return to in the future. We also gained a good amount of friends, a little money, and a new band member too. [Evan O'Neal on drums]