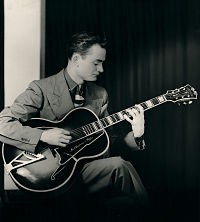 If you learned how to play guitar sometime during the past 50 years -- unless you took lessons in a cave -- you have learned something from Mel Bay. The one person he couldn't teach, at least directly, was his son, 66-year-old Bill Bay, who peppers his speech with the phrase "gee whiz" as he discusses his father's legacy: Mel literally wrote the book on learning guitar. "Music was everywhere," says Bill.

"We didn't do well with me as a student and him as a teacher because I realized in very short order I could never make a mistake," says Bill, who took lessons instead from one of Mel's students. The common number of links between a modern guitar player and Mel Bay is frequently just one. "He would say let me show you how it goes and then it would end up being a concert. But it was a great one. Gee whiz, most of the people who play and love guitar probably don't know that Dad helped them get there."

On June 30, Mel's legacy will be rewarded with his addition to the St. Louis Walk of Fame.

Mel was born on Feb. 25, 1913, and though he probably spent that day preoccupied, he spent the rest of his life playing, teaching or writing about the guitar. Mel ran a music store (Mel Bay Music), gave lessons and played in a trio (The Mel Bay Trio) six nights a week for 25 years. "He didn't sleep much," Bill says. In 1947, he started his own publishing company, what began as DEB Co. and would later bear a name sprawled on the bottom right-hand corner of more than 15 million instruction books: Mel Bay Publications.

"I remember as a kid early on, Dad used to play in the house bands of the Chase Hotel and stuff like that where a lot of the traveling artists go," Bill says. His first memory of this event occurred when he was 4, but the tradition lasted past age 11. "Whatever guitar player was coming with the big-name band or big singer, Dad would invite them over for dinner that night, and they always said yes. I remember all kinds of famous guitar players coming over and them breaking out the guitars after dinner for a jam session."

Mel began his musical life as a tenor banjo player, and though his name is today synonymous with the guitar, he played anything with frets. His career as a teacher began as almost a necessity: During the Depression, a period when he could go days without food, it was one of few ways for a man of Mel's interests to maintain a steady paycheck in St. Louis. In short order, that check came from 100 students a week, those who were attracted to Mel's outgoing personality and self-taught understanding of an instrument that can be as fussy as it is rewarding.

"He had an uncanny ability to unlock the complex guitar fingerboard and teach it to people," Bill says. "Some people would take lessons from him just to hear the latest jokes. He was quite a performer."

His life was not without adversity, however. In school, he was a tiny guy, one who wasn't overly athletic. He grew up in Bunker, Missouri, a small country town, and he was unused to the politics of a larger music scene. Because of his focus on music education, Mel was frequently asked to give talks at conventions, where he was met with rejection. Other teachers took offense from the guitar teacher because they didn't consider the guitar a legitimate instrument.

It's unclear how those teachers would react today. Based on Mel's reputation, the government contacted him right after WWII and asked him to create a curriculum for returning GIs to learn the guitar. Later, after venturing on his own, he was consistently shot down by publishing companies who told him that there was no future for the guitar. So he started his own.

"He essentially laid the groundwork for publishing about modern guitar," Bill says. "There were publications for classical guitar going back centuries, but as far as modern guitar with steel strings and a pick, he basically established the way that is taught. Everything published in the last 30 years is a derivative of that."

Although Mel was frequently faced with offers to travel or relocate, he consistently refused to leave his home. "I've turned out for a lot of these," says Bill, who was president of Mel Bay Publications for 40 years until he retired last year. Bill and his sister Susan, 69, will accept the award in person. "This would have been special to him because St. Louis was his town. I think of all the awards he received, this one would have been one of the most special."