Summerfest 2011: What to Expect, What to See and More 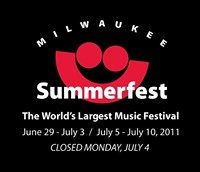 Billed as the "World's Largest Music Festival," Summerfest in Milwaukee is more like an epic feel-good concert series. The festival has the same good-natured and down-to-earth vibe of a city fair, packed with tens of thousands of people proud of their city. Make the half-day drive not for a trip down the rabbit hole of rock-fan hedonism, but for a civilized, music-lover's vacation. With more than 700 bands over 11 days spanning the July 4 holiday, it's conceivable to sneak up to Milwaukee for a long weekend or three-day stretch - but which three days?

Cost: Three-day passes cost $33, valid for one admission per day. One-day general admission costs $8 Tuesday through Friday, prior to 4 p.m. After 4 p.m. and on weekends, general admission costs $15. For this, you have access to nine stages on the festival grounds - but it does not include shows at the Marcus Amphitheater, huge-name concerts with separate ticket prices. You can purchase Summerfest Instant Tickets online, and no service fees apply. For rockin' seniors and children under ten, admission is $3 at all times.

Know This: Play your cards right, and you could get into Summerfest FREE! Nearly every day of the festival runs a different free admission promotion, generally supporting Milwaukee-based businesses. For example, the first 1,500 patrons on Wednesday, July 6 who provide a Klement's product label (8 oz. or larger) and a non-perishable food item receive free admission - which could take the edge off the extra $41-54 you paid to see the Black Keys, Florence and the Machine and Cage the Elephant at the Marcus Amphitheater that evening.

Rumor Has It: Speaking of free, we heard that in the past, if a Marcus Amphitheater show doesn't sell out, venue workers will hand out free tickets to it in the afternoon, so it could pay to get there early. While we wouldn't bet on it, keep your eyes open for this huge bonus to your fest.

Lodging: This ain't no communal camp-out festival where crowd rowdiness continues long after the mic's have cooled. The lights go down, and everybody goes home. So if you don't have a friend's sofa on which to crash, the most plentiful options are downtown hotels within walking distance of the lakefront festival grounds. If you choose a cheaper hotel or campgrounds farther away, there are plenty of Park-and-Ride shuttles which range from free to $6. Sit/stand at the front of the crowded midnight return buses, and watch out for brew-soaked bros spewing Miller Lite all over your shoes. Hey, it has to come up sometime.

Key Acts: If we exclude the marquee names hitting the Marcus Amphitheater, including Kanye West featuring Kid Cudi on June 30, Def Leppard with Heart on July 5, and Britney Spears with Nicki Minaj on July 9 - festival-goers can still catch plenty of high-quality acts - too many to name here - for a steal. For a few examples, on June 29, all battling for audiences in the 10 p.m. spot are Buddy Guy, Matisyahu, Jack's Mannequin, Daryl Hall & John Oates, Saving Abel, Meat Loaf and the Max Weinberg Experience. The lineup for July 7 features the Old 97's, Edward Sharpe and the Magnetic Zeroes, Michael Franti and Musiq Soulchild. On July 5, you can catch Wiz Khalifa and the Wailers; on July 9, you can see the Meat Puppets, the Flaming Lips and the Get Up Kids. Pick your dates and don't look back. It's just impossible to hit all the sets you want to see.

Pack: You can't bring in your own food or alcohol, so you're at the mercy of the festival vendors. Remember that Milwaukee is cooler than St. Louis and dress accordingly - temperatures average about 80 degrees Fahrenheit in July, dipping to 60 degrees in the evening - and take into account the breezes from the gorgeous lakefront where the festival is located.

Crowd: Wisconsinites and other Midwesterners, heavy on friendly beer-lovers and friendlier Harley Davidson-riders.

St. Louis Connection: Our cities' baseball and beer-town rivalry is well-documented, especially in recent years. If you just can't suck it up and drink Miller products while you're there, try the Water Street Brewery location on festival grounds for some local flavor with more, er, flavor. We're also riding a bit of Summerfest current here in St. Louis, with several of the acts making stops to or from Milwaukee.

Worth it? Absolutely. It's an undeniable deal in a beautiful location.