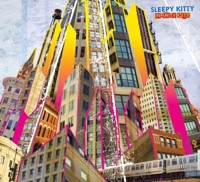 The RFT Music Awards Party is tonight at 7 p.m. at the Firebird. In addition to the announcement of all this year's winners, the evening will feature performances by 18andCounting, Prince Ea and Sleepy Kitty. The latter has something unique planned: Rather than play a traditional set, Sleepy Kitty will be playing the song "Seventeen" off its upcoming debut Infinity City as a seventeen minute guitar relay with three of St. Louis' finest shredders making guest appearances: Jason Hutto of Warm Jets USA, Kevin Bachmann of Troubadour Dali and Gabe Doiron, formerly of Old Lights. Listen to the studio version of the song below.

Sleepy Kitty drummer/vocalist Evan Sult says the group of guests are, "three of our all-time favorite guitarists in St. Louis," and adds: "What's a guitar relay? Well, you'll know it when you see it!"

Infinity City is (finally) out on July 12th through Euclid Records. You can pre-order that sucker today, if you'd like. Half the album was recorded by Hutto, including "Seventeen."

Again, this Awards Party is free. See you tonight.