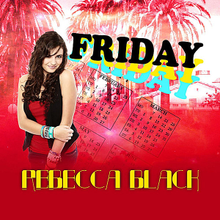 It's only been a few months since you got tired of Rebecca Black's "Friday" for the first time, but now the singer and her masterpiece of viral awkwardness are embroiled in what amounts to the first ever viral video label dispute. Following ARK Music Factory's botched attempt earlier this week to turn the video into a $2.99 rental the video's been removed from YouTube entirely, which has had the strange effect of bringing it back into the public consciousness for the first time since mid-April.

I can't imagine how jealous Tay Zonday is at this moment.

The legal status of "Friday," which was produced, written, and (at least theoretically) rapped over by Patrice Wilson, half of the ARK braintrust, has been in question from the moment it went viral and someone had a reason to care about the answer. The ARK model is typically described as a cousin of the vanity publishing model that's been around for decades, but there's a crucial difference: While vanity publishers take the author's work and publish it for a fee, ARK's $2-4000 fee pays for a finished song and a music video; all Rebecca Black and her fellow ARK starlets do is sing over the track and appear in the video.

The end result is somewhere between a vanity publisher and one of those books you can buy with your kid's name find-and-replaced into it, and ARK apparently retains publishing rights to each song, while the singer is given the master recordings.

This is all simple enough when the video's being viewed by the girl's parents and all of her friends. But a few million hits into Black's social media world tour, her lawyers were threatening legal action, claiming her name had been exploited and seeming to question ARK's rights to the song's authorship, perhaps the first time two people have ever fought to take the credit for writing a rap about changing lanes when a schoolbus passes by.

Things were quiet for a while after that, although ARK continues to imply a connection to Black on its website, having recently launched a "TGI Fridays" feature and asking new would-be star Abby Victor about her in a front-page interview.

What renewed the legal wrangling was ARK's apparent, stupendously overconfident decision to add the video to YouTube's new rental service, which would have meant an astounding $2.99 fee to watch the video for a period of three days. (YouTube execs must have seen how well that business model was working for Blockbuster and decided to pounce.)

The rest of the story played out in an appropriately web 2.0 way: Black was informed via Twitter Tuesday (that's the one where Wednesday comes afterward) of her quasi-label's move, her lawyers got wind of it, and as of this moment it is now impossible to show your friend who's been in a coma for four months the video you thought was really hilarious in March.

Don't worry, though; it's still available on iTunes while the legal battle wages over the 160-million-view video, and reliable sources tell me Patrice Wilson's verse on Alana Lee Hamilton's "Butterflies" is much funnier, anyway: