There's A Killer Among Us -- 'Bad First Impression': Lost Tracks of St. Louis 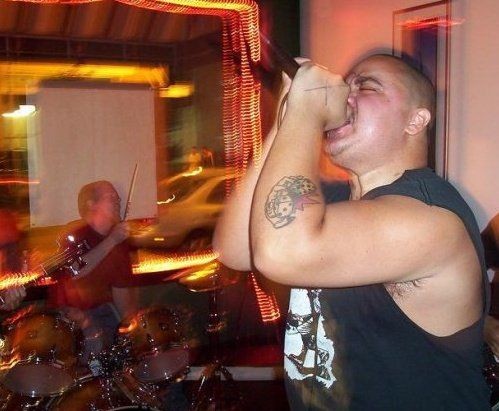 St. Louis' musical history features a wealth of local D.I.Y. talent whose cultural significance has further solidified an ever-expanding reputation for true musicianship and solid attitude. Stemming from the underbelly of the river city, bands like Dazzling Killmen, White Pride, and In Medias Res, have resonated with music enthusiasts both near and far. Unfortunately, as often is the case, it is easy for handfuls of acts to fall into obscurity from the public arena, leaving only recordings.

In an effort to shine light upon local bands from the past, I've decided to share selected audio gems from acts that have either been forgotten or who never received deserved recognition. This feature will highlight recordings and conduct interviews, providing a peek into the past. Culled from local band members as well as my personal collection, these recordings will hopefully find a new home in the hearts of a growing generation of music lovers in St. Louis. First up: "Bad First Impression" by There's A Killer Among Us

History: There's A Killer Among Us began treading the darker side of St. Louis music in late 2000. Born out of the disintegration of Little Bitter (a band of similar vision), these four best friends took up arms against the sonic blockade with an audacious brand of heavy rock. Serving as a stylistic melting pot, There's A Killer Among Us began writing songs, never tying itself down to one genre.

TAKAU's style is erratic to say the least. Characterized by an unabashed dysfunctionality, the music is both refractory and combustible as schizophrenic guitars thrive off ADD syncopation. The tender vocal leanings place you on the journal pages of vocalist Jason Timberman. His self-deprecating cries of love, loss, and abandonment emote a palpable pain in suffering, as the start-stop looming of hyperactive cacophony simultaneously erupt and dismantle. The band's ability to meld melodic math rock guitar with bombastic percussion makes for a dramatic marriage of frantic post-hardcore crunch with a post-rock temperament.

Featured as the opening track on the 2001 Don't Name It compilation (released by Everywhen), "Bad First Impression" marked the birth of the There's A Killer Among Us moniker. Recorded by Chris Deckard at the now defunct Penny Studios, this recording marks the very first audio document of the band.

As contemporaries of Skarekrau Radio, The Conformists, and Sine Nomine, it is a shame that TAKAU's legacy is practically unknown to most in the area. Luckily for the mound city, the boys are back in the saddle in a constant effort to write, record, and formulate the chaos within.

For more music, check out the demo Get Living Or Get Dying or visit the band's web site.

Bad First Impression by There's A Killer Among Us

Track: "Bad First Impression" released on the Don't Name It Compilation on Everywhen Records in 2002.