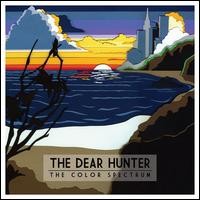 Every Tuesday, record store shelves are re-stocked with the new album releases of the week. There's more releases than we can share with you, but here are a few highlights to get you started. This week brings a reissue from alt-legends Sebadoh, Canadian synth fiends Junior, soon-to-be visiting the Dear Hunter and self-releasing singer Marissa Nadler.

Junior Boys Canadian synth-poppers Junior Boys' fourth studio effort, It's All True. The band kicks off the North American leg of its tour tonight at Webster Hall in New York City. Though it doesn't include a stop in St. Louis, Junior Boys will play in both Chicago and Indianapolis.

The Dear Hunter East Coast indie rockers the Dear Hunter's The Color Spectrum is an ambitious project that consists of a series of nine EPs that each represent a different color of the spectrum, with the band's purpose being to represent the color spectrum through music. The Dear Hunter will be stopping in St. Louis next month on July 26 at the Firebird with Kay Kay And His Weathered Underground.

The Dear Hunter-"We've Got A Score To Settle"

Sebadoh Mainstays of the indie rock scene through the '80s and '90s, Sebadoh is back...kind of. The band reissued Bakesale, which originally debuted in 1994. This album was the first studio effort post-departue of founding member Eric Gaffney. The reissue includes an additional CD of b-sides, rarities and other tracks, as overseen by band members Lou Barlow and Jason Loewenstein.

Marissa Nadler With four albums to her name, singer Marissa Nadler decided to release her fifth, self-titled effort without a record label. Instead, Nadler utilized her own Kickstarter campaign to fund the album. The album has the folk elements that Nadler is known for, with some synth thrown into the mix. On tour this summer, the closest Marissa Nadler will come to St. Louis is Chicago, where she'll be performing in July.

Marissa Nadler-"Baby, I Will Leave You In The Morning"