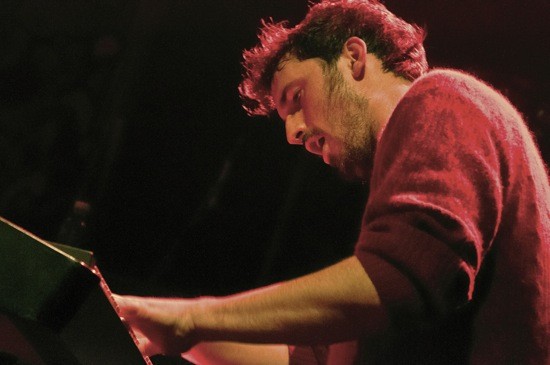 The Head and the Heart is generous to its doters and detractors alike, as it must be on its ascent to the top of the neo-folk heap. The young Seattle sextet played in St. Louis for the first time yesterday evening -- but really, they played at least three times: an in-studio at 88.1 KDHX, a free acoustic in-store at Vintage Vinyl and finally, to a sold-out crowd at Blueberry Hill's Duck Room.

During an hourlong set, THATH played its full catalog to 300-plus already-diehard fans. The band's first three songs, including crowd favorite "Ghosts," kept up the energy thanks to jangling tambourine and Kenny Hensley's jaunty piano lines. This '60s sunshine bounce was not exactly what you expect when the band's been associated with "old-timey folk," but it reveals the band's true leanings toward influences like the Beatles' reeling pop.

Of course, the band demonstrated plenty of folk tendencies: talk of "mama," imagery of family and home, as well as a bounty of pretty three-part harmonies. Josiah Johnson and Jon Russell traded lead vocal duties, a nice-guy pairing of two strong singers who are different enough from each other. Where Johnson's voice is clear and clean, Russell's is raspier and ardent à la Ray LaMontagne.

The third piece of the vocal puzzle is violinist Charity Thielen, who shows up in recordings but seemed underused last night. The few times she unleashed her voice -- as on the remarkable "Rivers and Roads," a noticeable tremor shot through the room.

Much has been made of the fact that the band sold 10,000 copies of its debut by word of mouth alone before Sub Pop took them in. Of the young crowd pressed to the stage (I could only see their hands shoot up in ecstasy with each dip in harmony), I wondered how many were seeing their "favorite band" for the first time, at the moment just before it's discovered by everyone else in their American-lit course.

THATH, raw as it is, showed both a knack for and room to grow in the songwriting department. Though it seems to resonate with listeners, I don't buy the line "I wish I was slave to an age-old trade." (Actually, I think you want to grow your beard and sing songs. Not that there's anything wrong with that.) What exactly is the nostalgia for?

Prediction: "Lost In My Mind" has potential as a crossover radio hit in the vein of Mumford & Sons' "Little Lion Man." With three distinctive vocalists -- and because we belong to the generation who yearns to dwell in multiple possibilities, and centuries -- expect an abundance of solo albums and side projects.

WTF: When opener Abigail Washburn, she of the soulful whisper and clawhammer banjo, told us she spoke Chinese and visited Sichuan province twice a year -- she had to prove it. (This is the Show-Me State.) So she translated suggested phrases from the crowd, including, "The robots are on their way!" She then sang a Chinese-language composition that featured bandmate Kai Welch on trumpet: The performance by the Jennifer Grey lookalike was eerie, regal and totally captivating.