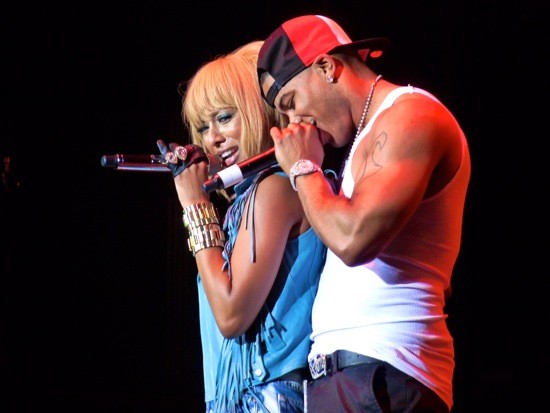 Waka Flocka Flame, who is one actual album and three years into his career, is your hysteria-inducing, panty-dropping, totally uncontested king of Super Jam Four. And he didn't even headline -- that honor went to Ludacris, perhaps because neither Waka Flocka nor Wiz Khalifa (the second-biggest draw) actually have enough material to justify an hour-long set. But let's not get confused: A teenage girl looked me in the eye and then elbowed me in the dick to prevent me from moving past her to the photo pit during Waka's set. For Ludacris, I could have stood right in front of the stage and spun around with my arms outstretched without hitting anyone.

Over 14,000 people piled into the Verizon Wireless Suburban Hillside Extravaganza for Hot 104.1's annual (although... more on that in a minute) big-name overload. It was the sort of affair where Wiz Khalifa got about as big a cheer for removing his jacket as he did for playing "Roll Up." Larger-than-life pop stars hit the stage, play a few hits and flash a few grins at their adoring masses and get out of the way.

The STL Mixtape set gave four locals a chance to play one song: Rockwell Knuckles brought along Tef Poe for scorcher "Government Name," then it was the Block Boyz, MoTre and Ruka Puff in rapid succession. All fine musicians who you should go see at shows when they aren't playing support to ten acts that spend a lot of time on TV. Like Mindless Behavior, a barely-teen boy-group that literally played its hit "My Girl" five times in two separate sets at Super Jam.

Travis Porter had the first set any serious number of people payed attention to. The trio played its club hits ("Make It Rain" chief among them) and wandered off to the 104.1 satellite booth, where screaming girls ripped a banner away so they could peek at the three MC's ankles.

Any semblance of family-friendliness ended with Lloyd, who spent at least half of his set doing dance moves that can only be described as air-fucking. He does what he wants -- that voice is dizzying. "Girls Around The World" was a highlight, though I admit being a complete sucker for the Eric B. & Rakim sample. Lloyd has a new album coming out. To get the crowd excited, he listed of some of the people who will be making guest appearances. In order of loudest cheer to quietest: Trey Songz, Chris Brown, Lil Wayne, Andre 3000, which, coincidentally, is almost exactly the opposite of what it should be.

"If you making love tonight, I want ya'll to play this song," Lloyd said by way of introducing "Lay it Down." By this point he'd removed his vest so we could all see exactly how his abs contract when he is humping someone.

Yung Chris (a.k.a. YC) showed up to play his single "Racks" for ten minutes before giving up the stage to Yo Gotti. The Memphis MC brought out "big brother" Nelly, and what did the two men with nearly thirty years of experience between them perform? A remix of 2011's "Racks" with an encore appearance by YC. And you thought the hyper-speed hype cycle was doing damage to indie rock.

This isn't the best atmosphere for lots of musicians and performers. It is exactly the place, however, for Keri Hilson, who can hold down any stage of any size with a magnetism so big you could feel it all the way up in the cheap seats on the grass. She emerged center stage wearing acid-wash jean cutoffs and absolutely tore through her set -- it helps that so many of her biggest songs are arena anthems. Nelly returned for "Lose Control," and Hilson explained that "Pretty Girl Rock" is about female-empowerment.

I saw t-shirts for only two of the acts on the Super Jam bill: Waka Flocka Flame and Wiz Khalifa. It wasn't like there were a couple -- each had hundreds of outfitted supporters. This is what catapulted this thing, these two sets. People came to see two of the brightest stars currently shining on the hip-hop scene, and despite their youth, both delivered.

Wiz Khalifa is an odd presence: Gangly and sort of a goofy dancer. Early Blink 182 seems like a good reference point, and you can hear that attitude in the music, too. Not so much "Black and Yellow" or "Roll Up," but "No Sleep" is an obvious dead-ringer, and that's no accident.

That's not an insult -- early Blink 182 was great and Wiz is too. Hip-hop purists might bemoan his sing-rap hybrid style, but the dude's creating something that matters to a ridiculous number of people. Just ask the crowd at Super Jam, which was about as frenzied as you can be while also getting high as shit.

This man knows what the people want. Final three songs: "On My Level," "Roll Up," "Black & Yellow." What he lacks in depth he makes up for at the top.

There tended to be fifteen minutes between sets: a comedown, a quick set change and back. There was considerably less between Wiz and Waka. Just a couple minutes, barely enough time for a collective catching of breath, and then Waka Flocka Flame and two dozen random posse members took the stage. Dick-elbowing ensued. This was total pandemonium, just complete raw madness. Waka Flocka makes so much more sense at a place like this -- who needs more than yelling when it is so thoroughly corroborated by the crowd?

Waka Flocka Flame is the id of hip-hop. He is nothing but agression and emotion; the words completely don't matter -- whether he's forming sentences (rarely) or just leading call-and-responses of his name like a god damn Pokemon (much more frequently), it all means the same. He throws his hair around and storms back and forth across the stage and, unexpectedly, smiles constantly. It's all part of the show. Most of the Super Jam Four bill comprised smooth talkers. Waka is an odd sort of ladies' man; he found an audience member to dance with onstage by demanding of one of his hangers-on, "Get me a girl. Hurry up. Get me a girl." Like a pillaging warlord or something. And when a girl was, in fact, got, he was completely professional -- she danced and he mostly stood there. Probably a smart move. If she were under 18, she'd be part of the vast majority of the crowd pushed against the stage.

Half an hour, a few singles, "No Hands" to close out the set, and Waka was gone. Much of the crowd left with him, even though we still had Ludacris coming. Ludacris, who is without question the best technical rapper on that bill and has by far the most storied career, and he played a great set. But this wasn't about who belongs in the pantheon. This was about who's burning brightest right at this exact second. Who knows what will become of Waka Flocka Flame and Wiz Khalifa, but right now, they hold the world in the palm of their hands.

Hot 104.1's big announcement and a bunch of photos on the next page Critic's Notebook

Personal Bias: This moment never comes again. Excellent work by 104.1 getting a bill this exciting.

Overheard: A girl on her cell phone walking toward the exit three songs into the headliner's set: "No, Ludacris is awful. I'll meet you by the front."