Glass Teeth is Breaking Up. Damnit! 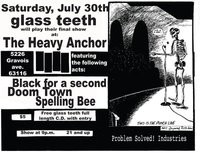 Well, this totally sucks: Glass Teeth is breaking up. Keyboardist Mark Early is moving to Atlanta this summer, so the band decided to call it quits.

"It was a drag for all of us," said Jeff Robtoy, vocalist and frontman. "And it came completely out of nowhere. We're all kind of a big part of that band; everybody adds a lot. We talked about replacing him but none of us thought that would be a good idea."

Robtoy added that he and guitarist Matty Coonfield (also of Tone Rodent with Robtoy and Early) are forming a new band with some "pretty well known" musicians in town, but he's keeping the lid on that for now, assuring us that the new band will be "cool." As if there were any doubt. Despite his move, Early will continue playing with Tone Rodent until they can find a replacement.

So clear your schedule for July 30: Glass Teeth will play their final show at The Heavy Anchor on Gravois.

The openers for the final show were picked carefully: Black for a Second, who've played quite a few shows with Glass Teeth, including their very first gig, split mates Spelling Bee, and Doom Town, a band they've never played with. It's also your last chance to cop Glass Teeth's final album, an all new full-length that the band is giving out for free at the show--provided you show up and fork over a measly $5.

"It was the first album we were really happy with. It's just kind of a culmination of the things that we were doing, it's just weirder, and it's harder to describe. You can't just say its punk roll or rock n' roll, it's got a whole bunch of weird stuff going on. I don't know, I just like it, I think it turned out pretty good," said Robtoy. The album was recorded with Gary Copeland about a month and a half ago, and it's being pressed right now.

"We felt like it finally clicked, just in time to break up I guess. But that's St. Louis for you... We had a pretty good run for a few years," he said. "But I mean, I'd rather it go off on a high note; at least we quit on top of our game."