Hayes Carll and Elizabeth Cook at the Pageant, 6/8/11: Twangfest Night One 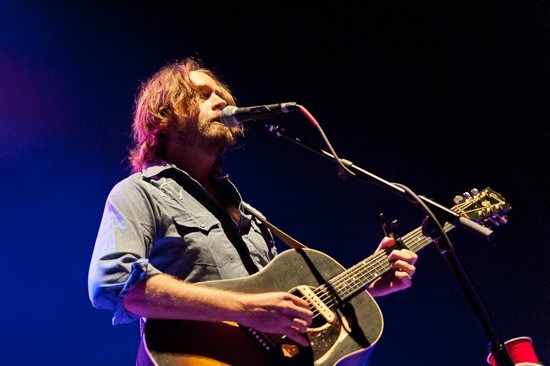 The first of this year's 15th installment of Twangfest took on the feel of an old-time variety show, with a well-mannered crowd and KDHX personalities announcing each act. Both Hayes Carll and Elizabeth Cook played it straight in their wheelhouses, mixing aw-shucks storytelling with plainspoken rootsy jams.

The exception was local sextet Kentucky Knife Fight, who opened the 'Fest with a ripping set of swampy rock. Damn roadwork on Skinker kept me from catching the first third of the performance, but what I heard of the band's big drums, two-axe attack and high-voiced snarling frontman was excellent, especially "I Can't Stand This."

Here's what Twitter said: ...via @caramoore68: "... sounds like making babies in a Maverick..." ...via @musicofthehour: "Alternate History: @KentuckyKnife Fight would be the house band in @DAVID_LYNCH's 'Wild at Heart'..." ...via (co-organizer Marie Arsenault) @marsen02: "@C_Knaus @gnip_gnop just came up with a new band name 'Missouri Slap Fight'..." 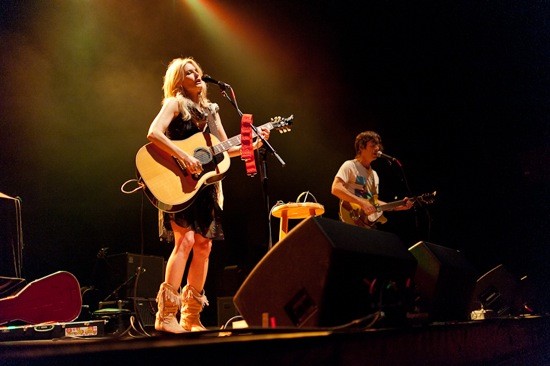 When I produce the made-for-CMT movie of Elizabeth Cook's life, tentatively-titled "Moonshine Runner's Daughter," I will cast Kristin Chenoweth in the title role. No one else could match the diminutive blonde singer's sassy charm -- or her outsized chops.

The darling of NPR last year for her latest album Welder, Cook writes songs with surprising - and therefore memorable - specificity. Last night, together with a guitarist and upright bassist (she handled acoustic-guitar duty), she laid on the twang as thick as custard, kicking off with "All the Time," a love song in the voice of the dusty tomboy she might've been: "I chase you down the mountain and I chase you up the creek."

Another winner was the snarky "El Camino": "If I wake up married, I'll have to annul it/ Right now my hands are in his mullet." But Cook was clever without irony on the gently raw "Heroin Addict Sister," which held the crowd rapt.

And then she started tap-dancing clogging.

So I'm changing the title of her biopic. Now it's "Shotgun Shirley Temple."

Hayes Carll doesn't take himself - or the tradition of the country balladeer - too seriously. He was at his best last night when underlining that point with a wicked sense of humor, straddling both sides of the fence between honesty and entertainment. He's got a humble voice but a crack band, and his songs made room for two of the band members to duke it out instrumentally, going punch-for-punch on electric guitar and lap steel, pedal steel, mandolin, etc.

Best Things Hayes Carll Sang: "Boy, you ain't a poet; you're just a drunk with a pen." "One bed, two girls, three bottles of wine..." "If I ever find Jesus, I'm kicking his ass."

Best Things Hayes Carll Said: His political platform: "There isn't much that can't be overcome with a little bit of physical attraction and a whole lotta alcohol."

"I've got a lot of sex songs, but not a lot of love songs. This one's a hybrid. More like an apology."