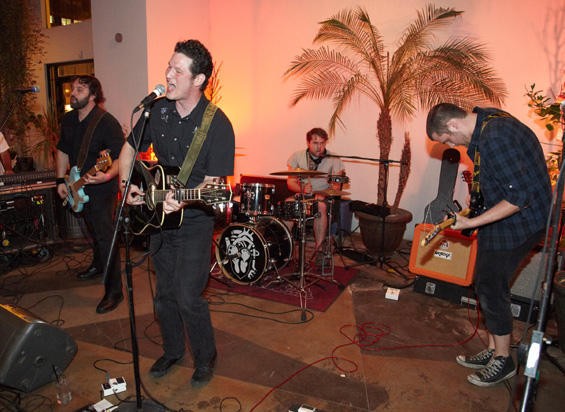 Ed: The RFT Music Showcase was Saturday. It was hot, it was crowded and you would have needed to be in ten places at once to see all the good stuff. Among those who tried was Diana Benanti -- she brings you part two of her highlights below. Read part one here.

Pretty Little Empire: The room was packed, the band played like all four members' good ol' boy hearts were on fire, easily oscillating from slow burning folk simmer to rolling rock boil--all while delivering ardent harmonies. Not enough can be said for a band that plays like everyone in it is going to die tomorrow. It was accessible enough to appease the unsuspecting diners, and there were more than a few diehard fans singing along. I Was Drinkin': Water out of the Copia bathroom faucet. Like a lady. I Was Thinkin': How Justin Johnson was born for this shit, and whether or not Pretty Little Empire is the new Theodore in terms of popularity. Judging by the large, jubilant in Copia's well-appointed dining room, it just might be. Yeah, I was thinking about how they're all cute too.

The Breaks: After 10 p.m., having participated in my least favorite activity (sweating in public) for seven hours, my will to remain upright was beginning to wane. Which is why I went to see the Breaks -- the rambunctious power pop had the effect of shotgunning a Jolt Cola, and the undeniable energy of the folks busting a move in the "dance zone" was an instant mood-lifter. The world sucks a lot -- I think we're overdue for a "shit guys, let's just have FUN" renaissance. I Was Drinkin': Bottled water. I Was Thinkin': How unfunny Nickleback jokes are. Like Scientology or the Senate, maybe if we ignore them they'll just go away.

Doom Town: The single best moment of the festival for me was during the Doomanoids set, when the makeshift supergroup played one of my all-time favorite songs, "Anything, Anything" the 1985 single from L.A.'s Dramarama. Ashley Hohman introduced it as a song "you might know from Nightmare on Elm Street Four," which I've never seen, but when I heard the first measure, I got so excited I aspirated my Trident. It stuck to my uvula and I coughed it back out. Projectile puke near miss FTW! I recovered by screaming my head off in appreciation, singing all the words and whipping my sweaty ponytail around with all the vehemence of a Bieber fangirl. I Was Drinkin': A life-sustaining vanilla latte from Gelateria. I gave up on getting drunk, and not falling the fuck over became my new goal. I Was Thinkin': ZOMG THIS SONG IS SO GOOD, I WANNA TAKE IT OUT BEHIND THE MIDDLE SCHOOL AND GET IT PREGNANT.

I Almost Died When: I was late for Theodore and quite confused at the time, so I walked upstairs in the Dubliner and enjoyed a song and a half from a band before I realized it was Karate Bikini. I became instantly terrified that if I didn't make it down the stairs and out the door fast enough, the band would start playing its self-referencing anthem, the one that repeats "Karate. Bikini. Karate. Bikini." over and over again until your heart is beating along with the rhythm and your brain adopts the chorus and doesn't let it go for about three weeks, at which time you're already pricing a Tardis on eBay so you can go back in time and un-invent both karate and the two-piece. However, lesson learned: don't judge a band by one shitty chorus, because the other songs I heard sounded great.

Pissed I Missed: Oh, a great many things. Wish I'd gone inside and gotten bloody feet at the Humanoids instead of sweating on the sidewalk, witnessed the genius of Warm Jets USA, heard Teresajenee slay the audience at Lola or made it to a single hip hop set. Better luck next year: hopefully by then we'll have hovercrafts.

But enough about me: who totally blew your mind? What should be different next year (besides the weather)? Did you buy a hotdog from Steve Ewing? Are you mad at Bunnygrunt? How was Oberhofer? Who would win in a cage match--Ellen the Felon or Paige from Sleepy Kitty? Fire away in the comments, inquiring minds want to know what you thought of the Showcase.