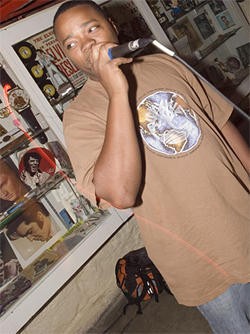 Seems a little redundant at this point to introduce you to the Force. You've heard their names, seen their videos, worn the pits and lands off your copy of Everybody Wins, and you'll be seeing them on the Showcase mainstage for free, free, free. We talked to Finsta, Hot 104.1 personality, host of STL Home Jamz, and co-creator of the Force. The rap collective is known for their hustle, and they're our number one must-see act at this year's festival. Finsta gives us the skinny on the tao of The Force, upcoming projects, and why you need to become a brain stain to make it in hip hop.

As far as fresh, undiscovered rappers go, who should we be looking out for on STL Home Jamz?

The one person who is super brand spanking new -- we featured him on STL Mixtapes Loud and Clear 1.0 -- is a guy by the name of Delmar Jones. He's pretty awesome.

How would you describe his style?

It's gives me a feeling of when I heard OutKast and Goodie Mob for the first time; it gives me that type of feel. He did a party for STL Mixtapes. I don't want to say it was his first performance ever, but as far as being an artist on that level, that was his first time.

It was crazy because the mixer went out while he was performing. But the way it went off, it looked like it was on purpose. He kept rapping, there was no beat, and when it came back in, he was still on the same beat. It was like, whoa! It was crazy, we were like, "Man that was dope, finished the end of his song!" Even Sir Thurl was like, "You gotta give it back to him, he kept on the beat the whole time!"

It's a pretty good song. He said he did it for his mom; pretty much just about the struggle. Dude is nice. We were like, "This guy has to be on the mixtape, period." That's the one artist that actually can be one of those guys, because he's got a new sound. Besides the regular guys that every body knows already that are still making it. As far as fresh, I mean fresh faces, he's my number one.

Do you think he has a shot at joining the Force someday?

I don't know, the Force is what it is. It's not like we go around recruiting people. It's just that. If you feel the same way about music as anybody in the Force does, you know what I'm saying, without nobody thinking it, automatically WhiteOut and RT-FaQ are part of the Force. Nobody would probably even know that, but if you look at the music that they're doing, and the people that they're surrounding themselves with, it makes them part of the Force. The Force itself is people who just enjoy music and they put the passion behind it.

What level of talent would it take for you guys to bring a new name into the mix?

It all depends on their type of hustle, it really depends on the passion and the person. If they don't want to go beyond the call of duty of regular music, if they don't put their name out there and do what it takes to draw an audience for themselves...some people possess an aura about themselves when it comes to music. Like the Tef Poes and the Rockwell Knuckles, the Gotta Be Karims and all those guys, and the girls too -- Teresajenee and Theresa Payne. They all possess a certain energy that makes people gravitate to them. It's not just about music. In the Force we have bloggers, videographers, photographers, all of that. Everybody is just putting forth that effort and putting that backing behind the whole unit and themselves.

Now, personally I don't feel this way, but I've heard people talk about our "If you can't beat 'em, join 'em" culture--instead of every man for himself, people are forming collectives or parties with like seven DJ s, and they use the Force as an "oh, St. Louis isn't that hard" example. Do you ever hear that criticism, and if so, how do you respond to it?

From my perspective it's a little different. I've been on the scene in St. Louis for a while. We have people not with the Force performing on Mondays at the Gramophone. The crowd will be lighter or it may not be a crowd for them. We try to give everybody a chance. They'll be like, "What I gotta do to get a show?" We tell them to come out, let people know your face, and just politik with people and get up there and freestyle at the end of the night.

Instead of looking for a show so you can showcase, why don't you become a stain on some people's brain a little bit, and get up there and show you have some skill? It doesn't matter what project you've got or what mixtape, people are looking for someone to point them in a direction, and people need to start pointing at themselves. People don't look at people as people anymore, they look at them as a product. That's where people are failing at. That's why I kind of instill the Hi-Pointe thing of people just getting together to rap. Two things happen: guys say, "yo I love the night, I'm gonna start coming down on a regular basis, maybe not every week by every other week just to hang out." They feel the vibe, they love the energy, the atmosphere and they feel like it's an open door for them. On the other side of it, "I wanna come and do a show. Uh, nah, this ain't my kind of caliber of a place, I'm used to the hood spot, or you know, where I don't gotta work so hard to do what I'm gonna do."

"Ohhh, is that what you're saying?! You're telling me that? Gotcha. Gotcha. Well, just come have fun anyway." I don't turn anybody away. Everyone's welcome to come in and rap. People only seize the moment when they feel needed. That's what's making the music of this city more disposable. People want you to know there products before they know who you are as a person. But if they don't like the person, chances are they aren't going to like the product.

So what should we be looking out for from the Force in 2011?

DJ Speck is going to mix an all original CD, I don't like using the word mixtape because everybody does, it's a project project, project. Tef Poe's got War Machine 2, Rockwell Knuckles is going to be doing Take Me to Your Leader later in the year. There's going to be a release party for the mixtape that Speck does. right at the end of summer. Last summer, we made Everybody Wins for sale at Vintage Vinyl, and all the proceeds went to the sending the kids to the baseball game. That doesn't happen until August. I'm hoping to do another store project and help kids go to the baseball game. Last year it was pretty cool, we sent a lot of kids to the game.

[laughs] As of lately, double hamburger. If I'm at the station and I haven't had anything to eat, I'll call Imo's quick. They be like, what do you want? I say, What I had last time! I know Staci [Static, also of Hot 104.1] likes the barbeque chicken with bacon. She likes it well done, she says "As soon as it comes out, push it back in!" But my number one would be that, the double hamburger. I'm pretty basic.