The First Ever Float Yr Face Festival: You. This Weekend. Eff Yes 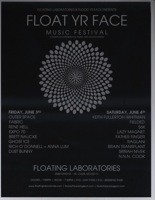 In an unfortunate twist of fate, the inaugural Float Yr Face music festival is happening the same weekend as the annual RFT Music Showcase. Don't despair yet--you can catch the first night of the experimental festival tomorrow, starting at 7:30pm. It's a collaboration between Kevin Harris, the benevolent proprietor of Floating Laboratories and his frequent co-conspirator Josh Levi, who runs the recently relaunched Flood Yr Face blog. Tickets are $10 for a one-day pass or $15 for the weekend. St. Louis' own noisemancer Ghost Ice, who was once again nominated for an RFT music award this year, opens the festival.

The weekend features 17 national and local acts, including Kranky recording artist Keith Fullerton Whitman, Outer Space with John Elliot of Emeralds, and one woman wonder Fielded, aka Lindsay Powell, also of Chicago's Ga'an. We caught up with Kevin for the scoop on who's gonna blow yr little mind, why the time is now for St. Louis, and why he's terrified of pizza.

Some names on the bill are acts that have graced Floating Labs before. Who are you most excited to see again?

Well, I am excited to see a few of the returning artists, but I am very curious to see what Keith Fullerton Whitman will be performing. I have a feeling it will be something unexpected and new.

Is there anyone that you never tire of seeing?

At the festival: Outer Space!! In general: Mick Jagger's dance moves in the "Start Me Up" video.

Do you have a couple must-see acts you'd be willing to share with the rest of the class?

*Watch this one with your eyes closed.

Rene Hell's set at the Pocahaunted show last year was amazing. Can you describe his style/the best set you've ever seen from him?

I have only seen Rene Hell that one time as well - at the Pocahaunted show. I have, however, been following his progress since then. He has been very prolific with regard to recording since then. His style ranges from driving, sequenced synthesizer repetition to abstract textural ring modulators to dynamic analogue drum thumps and blips to harsh wetwater electronic filtering to ambient storm clouds topped with a mixture of black tar and chocolate syrup - he is pure electronic. Despite the chaotic sounding description, his sound is pleasing to both the ear and brain.

Do you think the experimental scene in St. Louis is hitting it's stride?

St Louis has a long history of experimental music. I think the form of experimental music we are supporting at the festival is quite alive at the moment around the United States. In St Louis, it is confined to a small group of supporters and enthusiasts. The very nature of experimental music is that the form is constantly changing, and with each incarnation, those who appreciate the various forms also change. This makes it difficult for any movment to gather much momentum.

How do you think our experimental scene compares to other cities in the country?

I'm no expert on this. My feeling is that St Louis has an enormous amount of potential at the moment; It seems like the right time to be here.

What are your expectations of this weekend?

An experience that is fun, enlightening, memorable, and stimulating.

Is Float Yr Face something you'd like to happen next year and the year after that and forever and ever?

I don't want to do the exact same thing every year, but I would like to hold some sort of annual event. Next year, I would like it to be more inclusive of other media - maybe an experimental video fest?

Anything else we should know about the festival?

Yes, there will be tug boats in attendance.

When I was a child, while sleeping on my parents couch, my sister rolled a frozen pizza down our staircase. When the pizza reached the bottom of the stairs, it bounced up to the couch and landed on my face, consequently breaking my nose. I have not been able to look at a round pizza since then. Does Imo's make square pizzas?