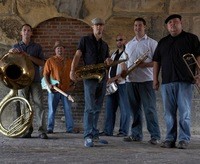 Taking much of its inspiration from the New Orleans second line tradition, the Funky Butt Brass Band has earned a reputation for its infectious blend of up-tempo jazz, blues, and soul. As the six-man band readies itself for a sophomore album release, we spoke with several of the accomplished artists about FBBB's experiences to date.

Funky Butt Brass Band plays at 4:30 p.m. on the outdoor stage at 11th and Washington

Calvin Cox: How did FBBB come together?

Tim Halpin: The drummer, Ron Sikes, and I are both in Gumbohead. We were coming back from Chicago one day listening to some New Orleans music, and we thought "Nobody in St Louis is really doing the brass band thing. Somebody ought to put something together." We'd worked with different horn players at different times - that's how we knew Matt Brinkmann, who's now our sousaphone player, and Ben Reese who plays sax. Ron had gone to high school with Aaron [Chandler's] wife...

Ben Reese: And Adam [Hucke] and I went to college together at SIUE.

TH: As we talked about it more, we realized we were of like mind and everything just sort of came together. We all loved that style of music, and we thought we could amp it up a little and do some different things with it.

For people who aren't familiar with your music, what can we expect from your performance at the showcase this year?

TH: We've been working on a new CD, so we'll be playing some new tunes that we're excited about. Other than that, we'll play our usual mix of traditional New Orleans jazz, and funk it up real good to get the crowd into it.

BR: We're excited to play for the crowd on Washington Ave. We're excited about the vibe down there, and we're looking forward to seeing how the showcase comes together.

St. Louis has a rich musical history, particularly in jazz and blues. How supportive has the scene here been so far?

Adam Hucke: St. Louis has been very supportive. We're one of the best sister cities New Orleans has, and we feel very welcome here. One of the best compliments we get is when people from New Orleans - and there's an awful lot of transplants here since Katrina - say we sound like we're from NO and they can't believe we're a local band.

TH: The two cities definitely have an affinity for each other; we almost had a built-in audience from the beginning, I think, because so many people have love and respect for this kind of music.

Your debut album Cut the Body Loose received many positive reviews. What can you tell me about the follow-up album?

TH: It's going to be called You Can Trust the Funky Butt Brass Band, and we've got more original stuff this time around. We only had two original songs on the first record; on this one there'll be six. We spent a lot of time honing our writing for this one, and we were very selective of the covers we took on. It's going to be a nice mix of the two.

Aaron Chandler: I think one of the most important things about the new record is that while we still pay respect to the New Orleans tradition, we're turning this into more of a St. Louis thing.

Given the nature of the genre, is it difficult to capture that 'live' feel in a studio recording?

Ben Reese: We wanted to be respectful to the tradition of the music, and make it sound as live as possible in the studio. We didn't want to get wrapped up in trying to make everything perfect or get caught up in the editing.

Tim Halpin: We tracked the entire album in a weekend; we did it about as live as you can do it realistically. There aren't a lot of overdubs on the record, and all the horns were recorded in one room. We really tried to capture the as much live energy as we could.