Weezer Covers "Paranoid Android," Runs Out Of Weird Things To Do 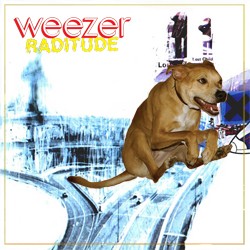 As a Weezer fan I've learned to think in phases. I'd like to think it keeps me sane to understand that no direction they move in, good or bad, will last too long. For instance: Make Believe was a period of open-hearted, lyrically (entirely too) direct songs with maximum popular appeal, and then Red was a move in the opposite direction, announcing a period of experimental, long-form songs, jump-suited live performances, and mustaches.

That spirit of change and artistic endeavor lasted about for about six months after the record came out, whereupon Rivers Cuomo--who had been talking up baroque counterpoint and remarking how he'd tired of typical pop songs--wrote a bunch of pop songs with Dr. Luke, Jermaine Dupri, and Butch Walker about bangin' club parties, which became Raditude.

Since then: A sudden-then-gradual lurch from writing albums that sound like the playlist at an alternate-universe wedding reception. Hurley's collaborations skewed a little less iTunes Top 10; the collaborations with teenage pop stars were balanced by unexplained Pet Sounds covers; and now Weezer has quietly uploaded a perfectly competent full-band cover of Radiohead's "Paranoid Android," a song as ambitious as the ones Cuomo seemed destined to write before he put pen to paper on "Crab at the booty / T'ain't gonna do no good."

That's it: They're out of things to do that might surprise anyone.

What's strange about this--among other things--is just how flat-affect the whole thing is. Most of the things Weezer does with an ostensibly straight face that pick up blogger buzz--releasing their own Snuggie; putting a jumping dog, Hurley from Lost, and finally a painting that looks like a Jehovah's Witnesses pamphlet on album covers; suddenly returning to the Blue Album sound for the purposes of releasing a cover of the State Farm jingle--are themselves weird, which creates the cognitive dissonance that gets Weezer to trend on Twitter. Now they're releasing a perfectly cromulent cover of a great rock song and the straight-faced lack of irony is finally appropriate, but it's coming after so many weird things that it's become weird.

What does this mean? Will their next album be more like the similarly complex "The Greatest Man That Ever Lived" and less like "I'm Your Daddy"?

Stop right there. Don't extrapolate anything. The fortysomething musician you see before you, earnestly strumming the acoustic guitar, was, not six months ago, collaborating with Miranda Cosgrove on High Maintenance, a song that can only be understood as being about a fortysomething rock star who's dating Miranda Cosgrove.