Kansas on Carrying On and Disappointing Queen Fans 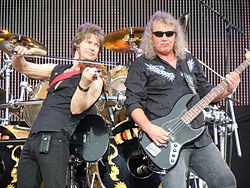 After 35 years, the band Kansas isn't too old to rock out and just old enough to make it into the classic rock radio genre. The classic rockers return to St. Louis this weekend for Rib America, where they will headline Saturday's bill. A to Z was able to catch up with guitarist Rich Williams to talk about where the band is now and the pestering stage fright that still plagues these ancient rockers.

Remember, you can still win a Rib America prize package including reserved seating and a bundle of food and drink tickets

Ettie Berneking: You guys just came out with a live concert DVD, There's no Place Like Home. How did you decide you wanted to go back to Washburn University to film there?

Rich Williams: We did an album with an orchestra some thirteen years ago and since then we're doing them every year. Then along came the 35th anniversary of Kansas, and we thought, "You know, it would be great to get this on film." And we've been doing several of these anyways. So we knew we wanted to do this but it came to where were we going to do it. And three of us went to college there, so it made a lot of since. So off we went.

It looks like you guys were having a great time on stage.

It wasn't fun at first. The day of and the weeks before there's a lot of grinding that goes on, and just worrying about it. You just tell yourself, "Come on, you've done this thousands of times." But still, it's being filmed and a lot of money is being spent. And if you blow it, it's there to be seen for all eternity. So no pressure. So it was pretty morose before we went out -- Just seeing everyone's faces they were a little bit tight. But you blow the whistle and the game starts, and it's a lot of fun.

It's hard to imagine that after 35 years of performing, you'd still get stage fright. There are situations that will make you nervous. Playing in your hometown you know before your family and friends and all these people, there's so much hubbub about getting all this together. I think most musicians like to play for strangers as far from home as possible.

Do you know how many tours you've been on?

Oh I don't know. We do between 70 and 80 shows every year. But we don't tour in the sense that you get on a bus and leave then come back months later. Typically I leave on a Friday and get home on a Sunday. And then I do it again the next weekend. That way it keeps it fresh and fun. Your voices don't get burned out. You can have a home life. There're a lot of plusses to it. I don't care what anyone says. You spend five or six weeks traveling in a bus, away from home, it's a grind. The way we do it is fun all the time.

It sounds like you're living a pretty normal life.

Well this is about as normal as it gets for rock and roll. We have good families and a whole life. But we'll be playing seventeen shows in July, so my home life will be crashing to a halt pretty quickly. But then come December and January I won't be doing anything, and I don't care for that.

Really? I'd think you would relish the down time.

No, what I like is playing every weekend. There were a few years when we didn't do this and you know, you kind of move on with your life. But when we got back on stage and the curtain was about to go up and there's butterflies in your stomach, you know that's what was missing. I mean talk about being alive.

What are you hobbies when you aren't playing?

Well I used to fish a lot, and as we speak I'm cooking. I'm a really good cook. It's what I love to do. My girlfriend is working, so when she gets back we're having buffalo ribeyes and grilled onions and sautéed mushrooms and iceberg wedges with blue cheese. I love to do this.

What role do you think the band plays in the world of music with more groups self-producing and the role of the record label falling to the wayside just a bit?

We've got our niche. We don't really worry about it. We're not tied to any record company, so we do whatever we want. The music business has completely changed. It's changed for everybody. There's a handful of select things that get crammed down your neck on radio, but everybody else just has to find their own way.

Speaking of 'finding their own way,' what was Kansas's way of making it big?

We just kept doing what we wanted to do the way we wanted. We don't sing about cars and girls. There's a little more to think about, and that can mean it takes a little more time for us to grow on ya. But our fans appreciate that.

We're you guys ever booed off stage when you first started?

No, but there was this one tour where we filled in for Queen. And this was in the early '70s and back then there wasn't any way to spread the news quickly. So the lights go out and everybody is expecting Queen then, 'ladies and gentlemen, Kansas!' and everyone's like "what the fuck?" I could hear people screaming while we were playing, "QUEEN!" It wasn't a whole lot of fun, but we won the crowd over every night.