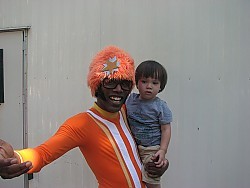 One-time St. Louisian DJ Lance Rock and the Yo Gabba Gabba! Live crew bring their kiddie show on crack back to the Fox Theatre for two family friendly performances on September 17. Leave it to the Luminary--last week it announced that spacey sweethearts High Places is finally coming to town. If you missed last week's killer Cold Cave show, don't despair--the Firebird brings back the doomy pop band on August 1. And you can catch Orgone's funky soul extravaganza for free at Vintage Vinyl if'n you need a double dose of the band on May 28

The Gramophone The Diplomats of Solid Sound, June 10

The Pageant The Band Perry, September 30

The Wood Ricky Stein and the Warm Guns, June 12