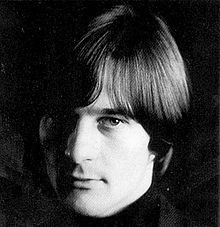 Gene Clark, founding member and songwriter for the Byrds, died on May 24th, 1991: Twenty years ago. Clark was raised in Tipton, Missouri, graduated from high school in Bonner Springs, Kansas and got his start playing in bands in the area. He is most well known for his work with the Byrds, when he wrote "Eight Miles High" "I'll Feel a Whole Lot Better", "Set You Free This Time", "Here Without You", "If You're Gone" and "Here Without You," among others. He had a generally unsuccessful solo career and eventually wound up in a legal dispute with Byrd's co-founder Roger McGuinn over the rights to use their old band's name.

But on a day like today, on the anniversary of his death, we remember Clark for the good times. Yes, we realize that the title lyric here is a little bittersweet, and yet we push through anyway, because this song is completely worth any inadvertent insensitivity.