Cold Cave at the Luminary Center for the Arts, 5/19/11: Review, Photos and Setlist

Cold Cave/Née/Half Gay The Luminary Center for the Arts May 19, 2011

You'd have thought it was the second coming of Morrissey last night: The crowd at the Luminary Center for the Arts was, by turns astounded, weirded out, perplexed and deafened by a trio of electronic acts.

Half Gay got things started with a slight departure from its normal set -- instead of one or two hype men dancing around in giant papier maiche headdresses, there were a handful of Half Gay boosters in garments fashioned out of yellow trash bags. They were all occupied with various tasks, including jumping around, piling curls of masking tape on someone else's head and tying string to a ladder and around a podium.

In any Southside basement or at a Half Gay haunt like Floating Laboratories or the Schlafly Tap Room, this behavior would have barely warranted a raised eyebrow. But in a place as clean and straight as the Luminary, people were intently watching instead of dancing like fools (which is the whole point of a Half Gay set). Its futuristic drums n' synth blitz might have been better served if swapped with Née's later timeslot.

Née is a young band, and front woman Kristin Dennis seems like she's still figuring out how to fit together all the synths and various electronic paraphernalia with Mic Boshans (who may or may not play in every band in St. Louis) on an electronic drum kit. Dennis has an unusual voice, or a beautiful voice that she uses unusually. Her songwriting is strong, and songs like "Take Me Out" prove she's capable of doing the Matt and Kim/Mates of State thing on a Glasser tip without simply regurgitating her influences. Still, the timing was off more than once, and Dennis herself admitted that being in an electronic band is "hard!" 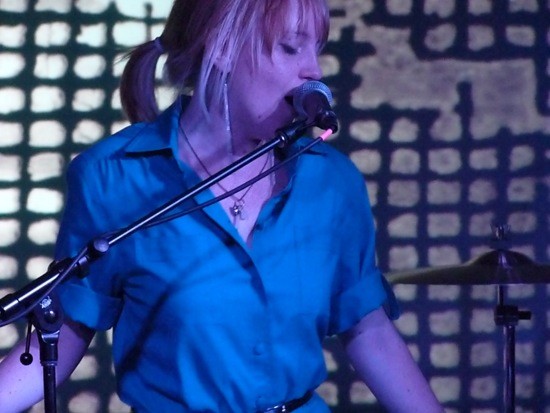 Cold Cave, on the other hand, was flawless. Sure, seven songs ain't a whole lot, but the way they performed, one more and someone in the band would've wound up dead. Even if you hated the set, there was no denying Dominic Fernow's energy or Eisold's effortless starpower.

The icy, unmistakable "Laurels of Erotomania" opened the fast n' furious set, followed closely by the electronic chug and eight bit glitch breaks of "Icons of Summer," off 2011's Cherish the Light Years. It was impossible to mistake a new song for an old one -- the new tracks were extremely loud, all synth spangles and punishing industrial detonations. The older tracks like "Laurels" and "Theme From Tomorrowland" were murkier and sweeter than the high definition ballast of the Cherish material.

But Wesley Eisold knew what he was doing bringing experimental wunderkind Fernow into the band -- his background in noise and power electronics as Prurient is responsible for bringing Eisold's Cherish vision to fruition. To wit, the sickening industrial rips that bled from one song to the next were grating, meaty and delicious -- the set would have been much less impressive without them.

For "Confetti," Eisold walked into the crowd, causing a teeny tiny riot as fans struggled to get close enough to touch him. Things got weirder during one of the last songs, when a fan grabbed Eisold around the head, and held him there. Eisold could not have looked less concerned that his person inspired the kind of reverence usually reserved for Morrissey or the pope. "Underworld USA" will undoubtedly soundtrack many a malcontented summer and the ominous "Burning Sage" closed the set, leaving the room in a deafened, but exhilarated gloom.

All Apologies: Turns out going to a show with a gut full of cold medicine masking a sinus infection isn't as hard as I anticipated. Writing a review with a fever though, that shit sucks.