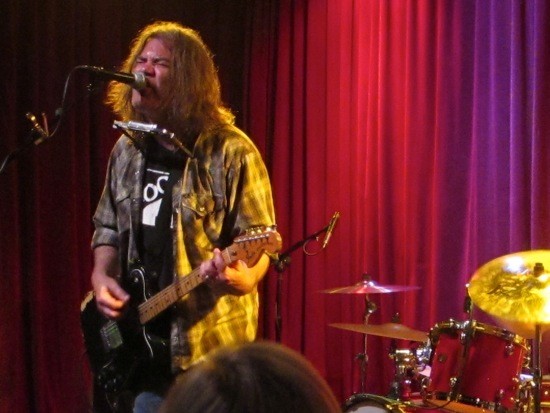 It's been nearly nine years since Slobberbone released an album (not counting side project The Drams), but that didn't stop a small but enthusiastic crowd from catching the Texas band's weeknight show at Off Broadway.

Openers The Dirty 30s played like they were the main act, despite not having a set list. They played thunderous and big, with three guitars and honky tonk piano fueling an hour-long set loaded with songs they introduced with, "This is about the Bootheel." Appropriate, since lead singer Jason Riley grew up listening to classic country in Cape Girardeau, Missouri.

Slobberbone rode The Dirty 30s' rough energy through the first songs of its set before offering a toast. "Here's to Off Broadway for providing us with drinks, a place to play, and sweet people," said lead singer Brent Best. While the audience gladly drank to that, the band pushed through "(I Can Tell) Your Love is Waning". Tony Harper's drumming built through the song's repetitive chorus to the murder ballad's massacre.

"It's all in the details," said an audience member at the bar after the song's final, haunting chorus. "Some people think these guys are just drunks. But Hemingway was a drunk, too."

He later calls "Give Me Back My Dog" anthematic, and rightfully so. That's what Slobberbone does best: big, raucous rave-ups like "Lazy Guy", "I'll Be Damned" and "Engine Joe". They take the shredding blend of punk and country born over two decades ago, giving it a vivacious energy that keeps it from sounding nostalgic or dated.

During the show, Best and co. mentioned that they're finally returning to the studio to make another album, and debuted two songs from it. They're sticking with the formula that works - pop hooks, rock bombast and clever country lyrics.

While guitarist Jess Barr switched to banjo for "the pickin' and grinnin' portion of the show," Best told of his clashes with Barr over the inclusion of banjo, and how he came to terms with having his most hated instrument in the band. "It's still a banjo, so it's still shitty. It's like your friend who always gets drunk and does shitty things." From there they launched into two songs that were more pickin' and rockin', interrupted only briefly by an impromptu duet by Best and bass player Brian Lane on Peaches and Herb's "Reunited" while Barr tuned the "fucking banjo" (Best's words) between songs.

Speaking of Lane, the tall, lanky Texan looked more like a backup player for George Strait with his cowboy hat and boots, except for his rollicking, teetering dance twirls as he played on the small stage. While introducing the band, Best cajoled Lane. "It's Wednesday night in St. Louis. All these people came to see us," until Lane removed his hat, stepped into the ballistic audience, and performed his solo with his bass behind his head.

After playing for two hours, Slobberbone ended with an encore of requests, and an invitation from Best: "Come hang out. You don't have to buy anything. We'll have drinks and smoke cigarettes on the veranda."

That pretty much sums up the night - a raucous, whiskey-fueled steam explosion among old friends.