Safety Words, heretofore most commonly known for mashing eight-bit video game samples with rap tracks, officially retired those songs last night. You will never again hear "Biggie, Rae, Ghost, Rash, Zits and Pimple" or "The Kids Are Chocobots." The two DJs are working on a new album, which they say is headed toward DJ Shadow. It's not hard to imagine; the creepy rhythms and brain-invading keys were there even in The Ghostfaced Pixels mixtape.

It's also not hard to imagine why they'd work for some distance from the eight-bit/Wu Tang thing -- that's a great way to be a novelty act and Safety Words has more to say than, "Check out this Battetoads pause music." Still, its biggest cheer came for the sample from the Super Mario theme song.

Steddy P (from KC) and DJ Mahf (of Earthworms) have found a rhythm. Already three collaborative albums in, the two have a shared spirit onstage that comes partly from playing shows together across the country all spring and partly because they're just a good match. Think Def Jux, musically, and the life of the party, socially. Mahf is an unusually active DJ, his hands constantly a blur, and Steddy is the sort of MC who works up a good sweat by track two. This was a Monday night and they got back a little over a week ago from Wisconsion via Arkansas via Missouri via Ohio via Michigain via... But you show up for Raekwon, and Steddy (decked out in a Wu shirt) and Mahf left the crowd primed. At 10:15 p.m. or so.

And the Firebird stayed eager, gamely, for the hour and forty five minutes while Raekwon methodically entered the Shaolin mind state (smoked weed on his bus). No matter; we expected nothing less. The Chef took the stage a little after midnight to the heavyweight hook from "Kiss The Ring" off his comeback burner Only Built For Cuban Linx... Pt. II and launched straight into "C.R.E.A.M." Might as well. It's not like he was going to run out of classics in the course of an hour-long set.

Raekwon's latest, Shaolin vs. Wu Tang, looked a little bit like a challenge, given the way the last Wu Tang album went (not well, if you ask Rae). But the Chef has explained it differently: Shaolin represents his hard-knock past on Staten Island and Wu Tang is the dignified fortress of chessboxin' hip-hop built by RZA. The struggle is internal, might vs. mind, and the one thing that is certain is that this album was designed to situate Raekwon and anyone near him (Ghostface Killah and Method Man, first) in the early-nineties heyday of Enter the Wu Tang (36 Chambers). Rae must have said the phrase "real hip-hop" fifty times last night.

He talks like he raps, savoring his words. He broke into a capella verses a half dozen times, always slowing his cadence to linger on the syllables. GZA thrills with wordplay; Rae thrills with delivery. He can make your mouth water by saying the word "fish." He was talking about that weed he got here in St. Louis and how it had him feeling nice, that "ooo-weee-loou-eee," and the words just dripped out of him.

Always the professional: Raekwon is not exactly a pacifist, lyrically, but he called for peace signs all night. He told us to find a DD ("Don't drive no vehicle if you know you pissy drunk."), and he told us he just wants us to take care of our families, the babies, "especially you young boys."

Tip your bartender, buy your official Shaolin vs. Wu Tang t-shirt and make sure everyone's out by 1:30 a.m. Raekwon rolls into St. Louis wearing sunglasses, raps his verses, gives everyone a little hip-hop history lesson and runs a couple sing-alongs and rolls out, wearing sunglasses.

Personal Bias: I saw an all-female-MC tribute to the Wu Tang once, and I thought the woman rapping Raekwon was the best. I went home and listened to my Wu Tang records a little more closely and realized she just had so many of the best verses.

By The Way: You can download Steddy P and DJ Mahf's latest, What Happened Tomorrow, by clicking right here. 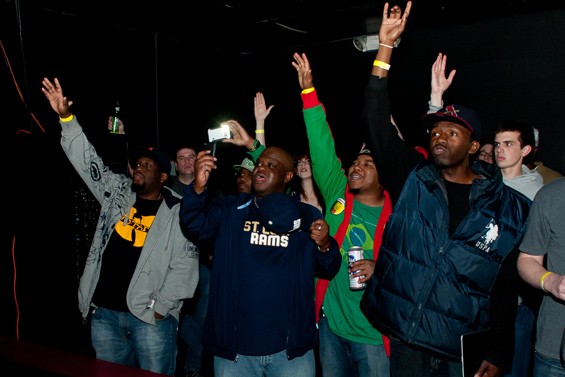