Fire at the Fabulous Fox: Photos of the Damage and Repairs

About 100 people were hard at work Monday dealing with the aftermath of a three alarm fire that broke out in the wee hours of Sunday morning in the historic Fox Theatre. The blaze started in a mechanical room located on the fourth floor above the lobby. No one was injured and the fire department is still investigating the cause of the blaze.

Richard Baker, President of the Fox Theatre, got a call early Sunday morning alerting him to the three alarm fire, which is automatically called for a building like the Fox. Baker was in New York at the time and immediately hopped on a plane back to St. Louis. He said being in the building Sunday was like sitting around a campfire, but he was "pleasantly surprised" and gratified to see that the plaster ceiling wasn't laying on the floor when he got there. 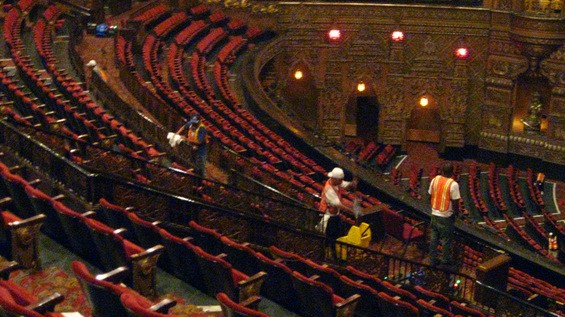 The majority of the damage was in the lobby--a few hundred thousand gallons of water blasting into the building discolored the mural on the ceiling of the lobby, and soot covered the carpet, chairs and stage like a stinky black veil. But high powered air purifiers running overnight reduced the smell to a faint aroma of barbeque by Monday afternoon. The small army of Catco restorers were busy scrubbing the theatre from the lobby windows to the orchestra pit, preparing the house for tonight's 8 p.m. curtain. White plastic sheeting hangs above the lobby to protect patrons in case the ceiling deteriorates.

Alissa Bosslet stood in line with about twenty other people yesterday waiting to exchange their tickets from Sunday's scrapped performances. She didn't find out about the fire until around 5 p.m. Sunday evening, when she was about to head out to see Jersey Boys for the fourth time. Unfortunately, her out of town guests didn't get the news until they'd already driven to St. Louis from Springfield, Illinois for the show. The Fox has said they will try to accommodate anyone who had Sunday tickets.

City inspectors went through the building on Monday and gave Baker a verbal okay to open as scheduled on Tuesday. "Something drastic would have to happen for us to not be out there tomorrow night," said Baker referring to tonight's performance of Jersey Boys.

Watch our interview with Baker below.