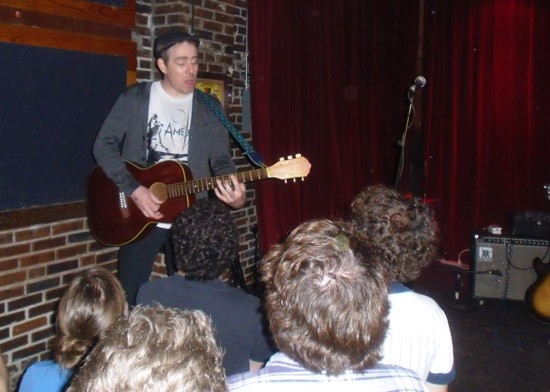 Few axioms in live music are as rigid as the Law of the Solo Headliner: Never put two loud and catchy power-pop bands on before him. Break it at everyone's peril. Unless, of course the solo artist is Ted Leo. The guy could follow the Big Bang and make you forget the cosmic event with just a riff and a bit of banter.

On a beyond clement Sunday evening at Off Broadway, a crowd in the 100-plus range welcomed Leo back after a canceled winter date and took in two surprisingly well-matched openers: Washington D.C.'s Title Tracks and St. Louis' The Blind Eyes. Both bands share a debt to Leo's tuneful power trio template, and the former, led by singer John Davis, even earned an end-of-the-set lead vocal cameo from Leo on a bracing cover of Geoff Turner and Three's "Swann Street." But even without it, Title Tracks' set was crisp and unfussy, as the band wasted no time with smart two-minute guitar pop songs, somewhere between early Elvis Costello and late-period The Jam, minus the anger of either. "Light Sleepers," from the band's new album In Blank, is a clever and concise single that benefited from spotless drumming, and a cover of The Wipers' "Telepathic Love" was even crisper.

The Blind Eyes took a cue from Title Tracks and zipped through a set spotlighting new material from With a Bang (set for release this June), including a song with an unconscious (surely) knick from the progression to X's "White Girl." The band has become the most reliably tuneful trio in town, though one wonders how much further they can take the carefree minimalism. The songs call out for harmonies or perhaps an organ; you can almost hear both between the spaces in Seth Porter's sweet and sharp melodies.

From the back of the bar, Leo watched the bands but he wasn't sizing them up. In delivery-boy cap and loose grey cardigan, the veteran just looked happy to hear his followers lead off the night with the kind of literate, danceable (of course no one really danced; this is still music for white people) pop punk he's been making for going on twenty years. By 10:25 p.m. his playful mood spilled over on stage, opening with a cheerful growl from his overdriven Fender Deluxe Music Man amp and so many of the songs we'd been waiting for. "Me and Mia" was both tender and urgent, "The Sword in the Stone" rang out bitter and believably working class, and a medley of his own song "Bleeding Powers" and a cover of the Misfits' "Angelfuck" reminded me less of either Leo or Danzig and more of Billy Bragg, turning up and letting the dirty and beautiful images, half folk -- half punk -- just stream out across the room over breakneck chords.

"I apologize for that pedal shit," Leo quipped, showing his awareness of the perils of the dude with the electric guitar who tries too hard. "There's nothing worse than when the guitarist hits the distortion pedal for the big solo and it sounds like Nirvana. There, I said it!" His banter was brilliant and unscripted all night, as he asked the audience if they'd rather have heard a Husker Dü song, joked about the Basque community in Boise, and confessed to following in the footsteps of the grand master of stage banter, Paul Stanley, though he's a latecomer to the pleasures of Kiss. References to "Cold Gin" were a nightlong refrain, as was the opening lick of Nick Lowe's "So It Goes." Leo teased the crowd with it all night and finally knocked the whole thing out as it should be played: wiry and clever, fierce and focused.

Forced to choose other highlights I would name a bittersweet "Colleen," an almost taunting "The High Party," and "Where Have All the Rude Boys Gone," with a superbly bent and twisted guitar freak out at the break. Covers like the "old school Celtic emo" of the Waterboys' "Fisherman's Blues" should have been too much of a good thing, but they slipped snuggly into the set. For an encore he set aside the guitar for an a cappella folk ballad: "Flower of Sweet Strabane." His wail was full of life - as rock and folk and punk and pop should always be.

Personal Bias: I once saw Ted Leo jump into a pit at the Austin City Limits Festival. He emerged bloody and giddy. I've never missed a chance to see him since.

Overheard: "We played Off Broadway for the first time on Mother's Day three years ago. There were five people and the bartenders here." - Seth Porter from the stage.

By The Way: Leo has been hitting some hard times of late, including financial struggles, which he detailed in a recent blog post.

??
Me and Mia
The Sword in the Stone
Bleeding Powers / Angelfuck (The Misfits)
Colleen
The "Nice People" Argument
Where Have All the Rude Boys Gone
So It Goes (Nick Lowe)
Under the Hedge
A Bottle of Buckie
The High Party
The Gold Finch and the Red Oak Tree
Little Smug Supper Club
One Polaroid a Day
Bottled In Cork
Timorous Me
Fisherman's Blues (The Waterboys)
"Do Anything You Wanna Do" (Eddie and the Hot Rods)
You Could Die (or This Might End)
Encore
Flower of Sweet Strabane (Traditional)