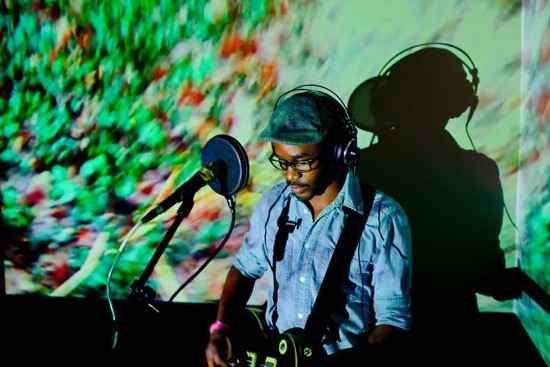 St. Louis indie pop up-and-comer Union Tree Review is preparing its first proper album, Death and Other Forms of Relaxation. Get a taste of what's to come with the video for "44", which the band released over the weekend in conjunction with its one year anniversary.

The video is well worth your 4 minutes and 33 seconds; it's an epic one-take, single shot tour through the band's apartment on Cherokee, where every person has different video footage projected on them. The footage was, in seven of the eight cases, shot by the band expressly to reflect what the song means to the particular member it's projected on. Watch the video and learn more about it from drummer Matt Ström below.

Kiernan Maletsky: Will this upcoming album be your first full-length (or official release, even)?

Matt Ström: Yes, this album will be our first official release; we've done a few very DIY pieces in the past - we'd burn the cd's the day before the show, and cut up old newspapers and magazines for the album artwork. This is going to be substantially more "official," though we're trying to incorporate the hand-made elements where we can.

Where did the footage for the projectors come from?

We wanted to capture what was going on inside each person's head while they played, and project it into the room; so we went out and found places, events, people, and memories that were significant to us. Except for Tyler (the bassist) -- we used some footage from a public domain nature film, because the feasibility of actually finding a fox in the woods was pretty much nonexistent.

Why did you feel the one-take thing was important?

The one-take idea was an incredibly appealing challenge. Bands have been releasing a lot of one-take videos recently; it's exciting to jump into something like that, improvising and spontaneously creating a very honest look at your music. Without editing or post-production, you have to be at your absolute best to pull it off. But sometimes "one-take" means the band plays a campy "unplugged" version of the song while they wander around a field. Intent on breaking this stereotype, we had to go all-out: 8 projectors, all with carefully-timed footage. 6 musicians, one audio engineer, and one photographer, working in a tiny apartment, every inch of which was wired for sound. It took about 14 hours to set everything up and get the timing right -- we had an electrical engineer come in and test our circuit out, because we were worried we'd knock out the street's electricity. And after all that, we recorded 4 minutes and 33 seconds of footage. It was terrifying and exhilarating, but that's exactly what we wanted.

Upcoming Show: The next time you can see Union Tree Review is this Saturday, May 14th at Old Rock House with Dots not Feathres, Bo & the Locomotive and King Arthur. The show starts at 9 p.m and costs $7