Check out a full slideshow of Social Distortion at the Pageant

Decked out in a Capone-esque suit, a top hat and his signature 1971 Goldtop Les Paul, ringleader Mike Ness led the band through classics, new material and deep cuts alike, proving to fans that at age 49--and three decades into its career--Ness and Social D have hardly slowed down.

Ness and guitarist Jonny 2 Bags wove in and out of Chuck Berry-influenced guitar solos, while Brent Harding (bass) and David Hidalgo Jr. (drums) locked down the rhythm. The band also brought a keyboard player along, who added clanking keys and organ-drenched substance to Social D classics (see "Prison Bound" and "Bad Luck").

Birmingham, England's Sharks opened the show with its sharp blend of Clash-inspired punk. Backed by an upright bass and a fiddle, Chuck Ragan followed and delivered a raucous set of punk-infused country. Ragan violently strummed, stomped and roared through his blend of Motorhead-meets-Pogues hellfire folk, which fit surprisingly well paired with Social Distortion's greaser punk pastiche. 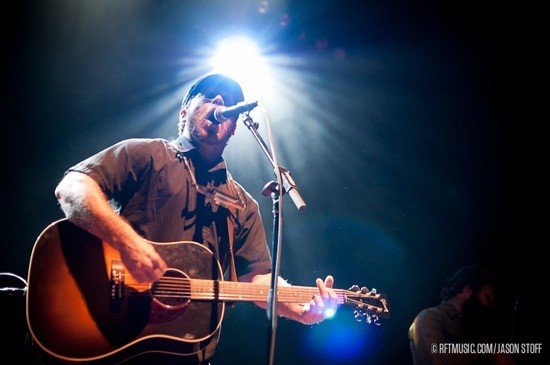 Road Zombie So Far Away King of Fools Bad Luck Mommy's Little Monster Sick Boy Machine Gun Blues Ball and Chain Down on the World Again Bakersfield Gimme the Sweet and Lowdown Down Here With the Rest of Us (?) Reach for the Sky Making Believe Encore Prison Bound Story of My Life Ring of Fire