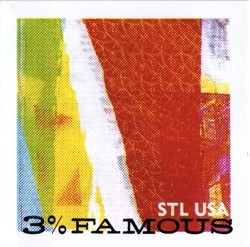 Attendees of Sleepy Kitty's Album Pre-Release Party last week at Off Broadway were promised a "secret, one-time-only gift." We, being adamant lovers of free shit, went to the show, and our efforts were rewarded with new music! 3% Famous, which contains a song from each of the bands on the show's bill (Sleepy Kitty, Warm Jets U.S.A and Frances with Wolves), will not be released in any format. They weren't kidding: One time only. All three bands are working on full-lengths; the songs from Sleepy Kitty and Warm Jets U.S.A. will show up on those and the Frances with Wolves track comes from earlier demo sessions.

The show, by the way, was great: Sleepy Kitty rocked hard despite a faulty mike stand, Warm Jets U.S.A. made me feel physically ill with sheer volume and Frances With Wolves hummed through a dream-like set.

This was originally supposed to be Sleepy Kitty's official release show for the aforementioned full-length, Infinity City. When it became clear the album wouldn't be ready in time, the duo (Evan Sult and Paige Brubeck) decided to come up with something else to set the gig apart. The idea for a release containing several St. Louis bands has been something they've wanted to do for a while -- it could be a way to get more locals in out-of-town hands at Sleepy Kitty shows in other cities. 3% Famous isn't that, exactly, but consider those waters tested.

Sult notes that this bill was very carefully crafted. He sees Warm Jets U.S.A and Frances with Wolves as the locals that most relate to Sleepy Kitty in terms of sound; he says the new album is headed sort of generally for the intersection between the two.

As mentioned, you can't actually hear 3% Famous anywhere, but we have a sneaky feeling that if you asked Sleepy Kitty nicely, they'd probably hook you up.