Every week, we'll ask your local record store clerks to advise you on which new releases are worth your hard-earned pennies. Today, Apop Records owner Tiffany Minx fills us on some of her favorite recent releases and reissues. She was excited about the new Prefuse 73 and some interesting psychedelic and exotica reissues. 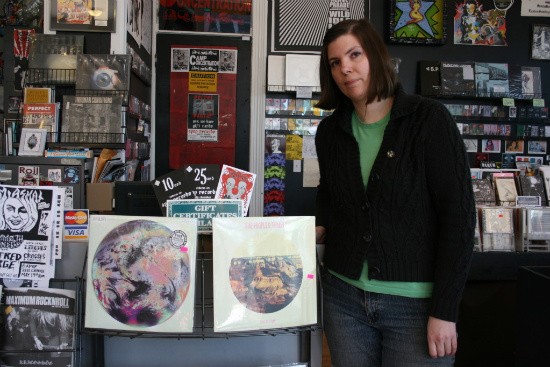 "This Burmese record's pretty cool, [Lun Yurn] . They're from San Fransisco. It's pretty heavy on bass and drums and noise. Usually pretty aggressive. Almost wall of sound, but there's some grind influence. Pretty cool, especially for people that have kind of followed our shop who are into more aggressive, heavy, confrontational music. This Konnichiwa band is new, I just listened to some tracks from it last week. I picked it up on a chance, giving it a shot. It's kind of '80s derivative in a way, but it's super poppy and really fun. Somewhere from kind of like '80s pop music mixed with later freestyle era, late '80s early '90s stuff.

There's a new Prefuse 73, which I haven't listened to yet, but all his albums are pretty solid. It's usually instrumental turntablist stuff. Sometimes there might be some MCs on it, but like I said, I haven't checked it out yet. There's a bunch of cool psychedelic and library music reissues.

This is really cool [Tom Zacharias' Belinda]. It's Swedish, it's like librarian music that's pretty filthy. It's along the general lines, like a lot of library music is, where it can be really funky and turn into psychedelic at the same time. The album artwork is really awesome, I think.

This is really cool, [A Journey to Tyme]. It's a 5 CD box set. It's like 80 tracks of all '60s psych and garage. Sort of like Nuggets-style, but a lot of bands that maybe weren't covered on that. I think it was initially out in the early '00s on vinyl, and I kind of wish they would have reissued it on vinyl again.

This Yma Sumac CD, [Miracles], it's from the early '70s. She was an exotica singer, and the tale was that she was an Inca princess, but nobody's really sure what her actual heritage is, as with a lot of other exotica stars from that era. This is through the '70s, and it's her and Les Baxter, who is really influential and a big part of the whole exotica thing. It's supposed to be more psyched out, but for me all of Yma Sumac's records, like all the early '50s late '40s stuff was pretty wacked out anyway. She has this seven octave voice, and she can just do crazy things with it. The fact that it's kind of gotten a more modern psychedelic influence is pretty cool. She's a neat lady."