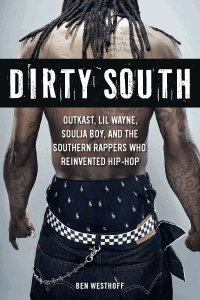 What y'all really know about the Dirty South? Enough to write a book, apparently. Congratulations are in order to RFT alum Ben Westhoff, whose second book will be officially released on May 1. The book, entitled Dirty South: Outkast, Lil Wayne, Soulja Boy, and the Southern Rappers Who Reinvented Hip-Hop, examines the origins of the chart-topping yet heavily criticized music that emerged from the bottom of the map in the late '80s and has risen to predominance in the new millennium. Westhoff will be in St. Louis tomorrow, Tuesday, April 26 at Left Bank Books. He'll be discussing the book and signing copies; the event is free and starts at 7 p.m. We caught up with the former staffer in advance of his return to St. Louis to get the low-down on his latest volume.

Calvin Cox: How's the East Coast been treating you?

Ben Westhoff: I like it out here - there's a lot of action. I miss St. Louis, still, for a number of reasons. [St. Louis] will always have a special place in my heart...

What are the big differences you've noticed between the local scene in New York and New Jersey compared to ours?

New York Hip-hop has a reputation for being kind of snobby about their style, you know--they like to talk about what "real" hip-hop is and the four elements. People take a lot of pride in the history, and some would say it's kept [the scene] from evolving. Don't get me wrong - obviously there's a great hip hop scene, but in St. Louis for example, it seems like people were more into experimenting and more open to the new sounds and the way things are going.

What inspired you to write Dirty South?

I really got into writing about hip-hop at the RFT. At the time, Nelly was still really big, and there were all of these other people coming out like J-Kwonn, Chingy and Jibbs. It was just a really exciting time for hip-hop music in St. Louis. That's how I started writing about the scene, and I fell for not just the music, but for the stories. I love telling these kinds of stories, so that's what inspired the book.

Is there something in particular that draws you towards southern rap?

I have the musical taste of a 12-year-old, basically. I tend to like what's on the radio, I tend to like Pop - I kind of like catchy stuff more than the "artistic" underground music. I like underground too, but I think southern hip-hop is more focused on being pop-driven and catchy.

How much time did you spend gathering your research for the book?

I only had about eight months total to write the book. I took two trips to the south; I basically stalked Luke Campbell of the 2 Live Crew, and went with him down to Athens to see one of his crazy performances/sex shows. I went to Houston, Memphis, Atlanta, New Orleans - all over the place - and I was doing interviews right up until the time I turned in the book.

What was the most memorable moment of your time on the road?

When I went out with this Houston rapper named Trae. He took me and his guys out to all these clubs. We ended up at this strip club early in the morning, and everybody started "making it rain." I'd always heard about making it rain in songs, but I'd never seen it, and I didn't really believe people did it. They broke out these big stacks of cash wrapped in plastic, like fresh from the bank, and started throwing it in the air. I was like, "Wow. This is really real."

Of all the rappers, Producers and DJ's you met with in the process, do you have a favorite?

Scarface is probably my favorite southern rapper, and he gave me just this crazy, crazy interview where he talked about his time in a mental institution. When he was 12 or 13, he tried to kill himself, and his parents had him committed. It was brutal to hear about, but he said his therapy really influenced his style as a songwriter. It was a great interview.

Recently, there was a fight that ended with a shooting at a Lil' Webbie concert in East St. Louis. Did a situation ever arise where you thought that you might be putting yourself in harm's way?

Not really. I did write about a situation with Rap-A-Lot Records and an artist named Big Mike, where at times I was worried that I was stirring shit up - but there was no situation where I felt in danger.

Has your experience changed your opinion of southern rap at all?

I guess one thing a lot of people always thought about southern rap was that it was like a "corporate conspiracy." The more I did the research, I learned that it's really the opposite. Even with Mz. Peaches [who made the song "Fry Dat Chicken," which went viral in 2006], it's not an example of the illuminati trying to dumb-down the masses or put out all these terrible racial stereotypes. It was just a couple guys in Shreveport, Louisiana making a video that they thought would catch on. Again and again, that's been the story with southern rap. The labels ignored Luke at first, they ignored No Limit at first; these guys had to really fight to get into the national consciousness.