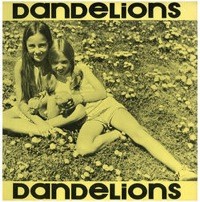 Last week, we brought you the story of the 1970 Webster Groves musical duo, Children of Sunshine. In 1970, Kitsy Christner Sheahan and Therese Williams recorded Dandelions, an album of original songs that found its audience 40 years later. In separate interviews, both Williams and Sheahan spoke highly of Jim Curran, the music teacher who provided support and nurture. Neither of them had seem or heard from him in decades, and expressed hope that our piece would help.

As it turns out, he was hidden in plain sight this whole time. Less than 24 hours after our story went live online, we got a message from one of Curran's classmates. He still lived locally, had seen our story, and was "surprised and interested" in reading our take on this project from so long ago.

These days, Jim Curran is an account executive at a sales and marketing firm specializing in promotional products. "Because of the article, Kitsy and I reconnected in person," he reported by email. "I had not seen her since her wedding about 20 years ago. Tres and I are in touch now also."

We couldn't resist the opportunity to ask Curran some questions to help fill in some of the blanks we found while researching the story. He was kind enough to answer quickly.

I was teaching guitar at the College School as a Webster College student on a work/study scholarship. Both Tres and Kitsy were very bright, outgoing, creative and talented young girls. They began putting songs together during the first year they met, which was fifth grade. When I discovered that they were doing this on the weekends, I encouraged them and helped them learn more chords and we practiced during our lessons. They began coming to guitar lessons together. Since I had a lot of experience folk singing around town, I knew we were on to something.

We worked on polishing their natural talent and working on arrangements and eventually sets, mostly of their own music. I had a year-end concert for my guitar students at the College School, so we used that as a rehearsal to go on the radio and Corky's Colorama.

When the idea of an album was brought up, I took charge of the project. After they wrote more songs, we all had a meeting with Kitsy's parents about the plan, and they volunteered to fund it. KBK Custom Records recorded us with the backup of two St. Louis Symphony Youth Orchestra members.

When the albums finally came in, almost all were sold quickly to friends and family. Maybe the next step could have been to market it, but I graduated from college and the girls were getting interested in rock music and the album was folk music so nothing was carried forward. I had the girls as guitar students in fifth and sixth grade, the highest grade at the school at the time.

I graduated in 1972 with an Art/Design B.A. from Webster College. I played folk music and weddings around St. Louis for a few years after that. I am very gratified that a wider audience is appreciating what I experienced and enjoyed 40 years ago.