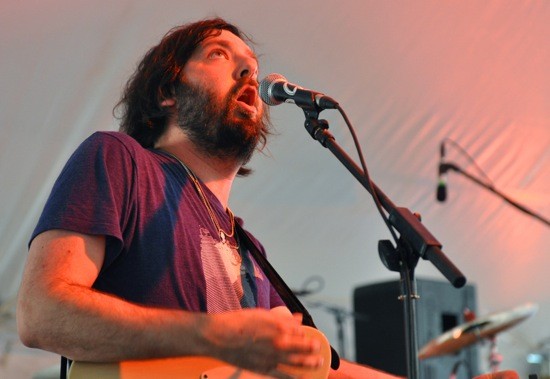 Somehow it seemed appropriate to be trekking out to the Billiken Club after a typical Midwest spring storm. I'd just spent an hour in my basement, waiting out the tornado warning and listening to the rain pound against the garage. Given that I was going to see two bands known for their reverb and feedback-heavy approaches, a little thunder and lightning didn't seem too out of place.

San Diego band Crocodiles has played St. Louis a few times before (as has lead singer Brandon Welchez's wife's band, Dum Dum Girls). Sometimes it hasn't gone so well - as when, they played the Firebird as a duo and played a truncated set due to drum-machine problems. This time they brought a full five-piece band, including a keyboardist who kept the Farfisa beat going all night and a drummer as adept at a Neu! motorik beat as a straight four-four rhythm. It made all the difference.

From the first song, Crocodiles couldn't have been more confident or involving. Lead singer Brandon Welchez often recalled Ian Svenonius in his onstage abandon and close shaves with other band members and their instruments. On record he often sticks to a low, understated monotone, but live he shows considerably more range. Crocodiles' songs are often drone-y, Jesus and Mary Chain-ish affairs, and there were similarities to the shoegaze gods in the way Welchez would just let his guitar hang, providing chordless sheets of feedback. Some of the best moments, though, were when the keyboard and fuzz bass propelled the sound, with the guitar churning out chorus effects or chopping away thythmically like a hammer hitting an anvil. The whole set was satisfying, and kudos are due to Welchez and company for keeping St. Louis on their regular touring schedule.

Bay Area's Fresh and Onlys have toured and recorded almost constantly since forming a few years ago, making appearances on such buzzworthy labels as Captured Tracks and Woodsist. This past week alone, Pitchfork spotlighted them as a leading purveyor of "San Francisco's New Garage Rock." On this, their St. Louis debut, they played a solid but not spectacular set. Lead singer Tim Cohen spun intricate melodies straight out of 1966, when garage rock began to get ambitious but not yet psychedelic. Guitarist Wymond Miles was constantly inventive, spinning surfy guitar lines and Neil Young/Dream Syndicate echoey evocations in each song. However, their stage presence was not particularly compelling, especially after Crocodiles had nearly rocked the house down, and the whole vibe of their live show lacked some of the magic of their recordings. Still, was it well worth leaving the house on a rainy Midwest night? Absolutely.