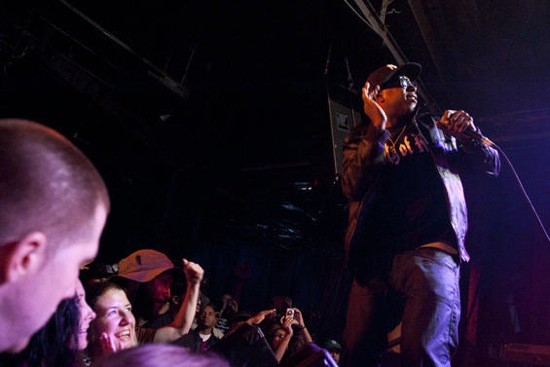 Not to be discouraged by the lightning, hail and winds that tore through the area last night, fans of alternative hip-hop ventured out to see one of the genre's premiere names, Talib Kweli, perform at Pop's in Sauget. My first attempt at reaching the eastside venue was cut short; as my car was getting pummeled by silver-dollar-sized hail, I turned back for fear of my windshield cracking. Others I talked to were similarly delayed or had decided to wait out the storm under overpasses or at gas stations. Fortunately, Talib Kweli was worth braving the elements.

View a slideshow of Talib Kweli at Pop's

When I arrived just after 8:30, I was disappointed to learn that the opening act, Dusty Wallets, had already performed. Dusty (formerly Spark1duh) has a sort of punk-rock approach to hip-hop that never fails to entertain.

The Earthworms took the stage shortly after my arrival with a nearly 40 minute set, featuring a mostly up-tempo selection of party-ready tracks from its three albums.

The crowd continued to grow during intermission, which lasted for the better part of an hour. At least there was plenty of good conversation to be had in the meantime; talking music with other Kweli fans is different than talking music at, say, a Rick Ross concert. I spent most of the break out on the smoker's patio, where you could feel the temperature dropping as wind gusts carried the rain under the canopy shelter.

Following intermission, newcomer Fred the Godson emerged flanked by two hypemen, one wearing Cardinal's gear and a huge medallion, and the other with a backpack. This was no accident: The Bronx native was clearly trying to establish himself as both a street-rhymer and a lyricist. Songs like "So Crazy" and "Too Fat" have a very East Coast, radio-friendly sound to them. And because his content may have defied some expectations, it took a while for the crowd to warm up to him.

Eventually they did, however, largely on the strength of a few acapella verses throughout the set. Unfortunately for Fred, the biggest crowd reaction probably came when his hypeman Ax (the one with the chain) spit his verse.

While the stage was being set for the headlining act, anticipation was building as the DJ played a mix of southern rap in the background. The crowd exploded when Talib took the stage around 10:45, accompanied by his DJ and a three-piece band. With his leather jacket and Yankee fitted, Talib immediately engaged the crowd with "Going Hard" from 2004's The Beautiful Struggle, followed by a barrage of classics from his catalog - including several joints from his latest effort, Gutter Rainbows.

Talib's stage presence was palpable. He doesn't rely on clichéd call-and-response chants or hypemen to hold the audience's attention; he relies on raw emceeing. With wordplay that's second-to-none, a diverse beat selection and a flow that's borderline inhuman, Kweli's music is guilt-free hip-hop at its finest. Highlights from his set included "Redefinition," "I Try," "The Blast" and "Get 'Em High." Another standout track was "Lonely People," featuring a sample from The Beatles' "Eleanor Rigby."

After closing out with "How You Love Me" from Gutter, The crowd was treated to a short encore set which ended with his hit "Get By."