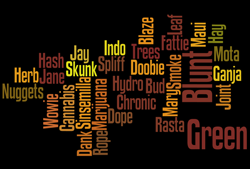 It's almost that time of year again -- April 20th. Better known to millions of people as 420, the (un)official holiday for stoners and pot enthusiasts everywhere. In honor of this day, we present eight classic songs celebrating the herb that has brought laughter to many, saved others from the pain of an illness, kept Hostess, Frito-Lay and Taco Bell in business and given the government something to bitch about for decades and decades.

8. Cypress Hill: Hits From the Bong

It just wouldn't be a list without some Cypress Hill. So let's kick things off with this groovy ganja melody. The song's opening bong hit sets the mood and that sample from Dusty Springfield's Son of a Preacher Man hits just right.

7. Afroman: Because I Got High

This Grammy nominee (!!) details how pot ruined one man's life. Don't feel too bad for him. With laughter in the background and a goofy vocal track, this song teaches us the truth about pot: no matter what happens, you just don't give a fuck -- it's all smiles when you're high.

6. Brewer & Shipley: One Toke Over the Line

This 1970 classic delivers one of the best marijuana-laced chorus lines ever. It was also immortalized by Benicio Del Toro in the feature film adaptation ofFear and Loathing in Las Vegas.

One of the earliest (and most overlooked) songs protesting the government's pot prohibition. With a witty hook and a hypnotic beat, this song deserves some air time on 420.

Popularized by Sublime's cover, this classic reggae track says it all.

Dropped on the bands debut album Southernplayalisticadillacmuzik, this song epitomizes cool. Its spellbinding flow makes you wish you could bypass the headphones, roll the song up and just smoke it straight into your brain.

Perhaps no marijuana-related image is more iconic than that of Bob Marley with a fat spliff hanging out from his mouth. The reggae god takes the number one spot.