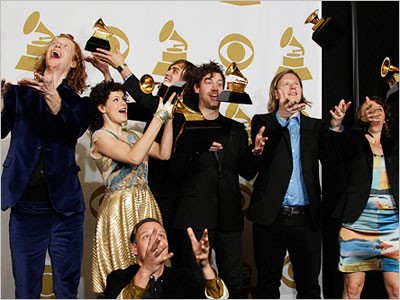 Who is Arcade Fire? Well, it's a Canadian indie band on Merge records that's known for its incredibly energetic live shows. Its latest record, Suburbs, debuted at number one on the Billboard charts last August. Oh yeah, they won one of those Grammy Awards for 2010 -- what was it? Album of the Year? No big deal.

Arcade Fire bassist Tim Kingsbury took a few of his last peaceful moments before tour and discussed what it means to be an indie band in the age of the internet.

Ever since the release of Funeral, Arcade Fire has become an indie demigod of sorts. Its live shows are otherworldly, its records are catchy yet challenging and its status has been huge in the indie world, yet just under the mainstream radar.

Until recently, that is. Arcade Fire took home the Grammy for Album of the Year and performed at the awards, much to the dismay and confusion of Justin Bieber fans. The event, sparked social media mayhem.

Chrissy Wilmes: I'm curious...what did you do with your Grammy? Tim Kingsbury: I actually haven't even gotten it yet! I think it's in the mail.

What do you plan to do with it? Does it have a special shelf? Will you carry it around for a while? I might turn it into a necklace or something. Wear it around my neck [laughs]. I've thought about it, but it's still up in the air. I've actually considered storing it at my parents' place, because I know they'd be really happy if it was sitting on their mantle. I'm traveling so much anyway. It's a little weighty.

How have things changed for you personally since winning Album of the Year? Not a lot in terms of my day-to-day life. There were a couple of my neighbors on my street [who] popped notes in my door, which was nice. I don't think they necessarily realized I played in a band before, so that was kind of a change. Nothing too much. We're just beginning a tour now, the one that will bring us to St. Louis, and I think the shows seem to be full, and there are definitely more people that have heard of us now. That changes things for sure.

After the Grammys, Arcade Fire trended on Twitter, as people expressed their confusion and frustration at having never heard of Arcade Fire or Suburbs. What do you think it says about music and culture at present that an album can win such a massive and seemingly mainstream award while still being under the radar of the mainstream? It's an interesting time in the music industry. Our route we've taken... we've been on Merge records since our first record, and I think ten or fifteen years ago it would've been kind of impossible for a band on Merge -- on any independent label really -- to kind of to get to where we are. The internet has changed things a lot. The major mainstream label music system has changed a lot because of the internet, and there's more access for bands. It kind of levels the playing field in some ways. I think the Grammies are sort of, it sounds like they're trying to figure out what exactly their place is, too, because it's not the same as it used to be when there were like a few record companies and it was sort of an establishment. That's changing a lot because people can turn to other sources now for music. It's kind of an exciting time.

Do you feel this opens doors for other indie artists? I don't think anything we did necessarily opened doors for other artists, but I think the nature of things right now [has]. It is an exciting time. You can put a video on Youtube now and become famous overnight. I think the exciting thing for me is that I think that if you're doing something [of] quality, if you're doing something and it's really good and people notice it, then it can spread through word of mouth or through the internet, which is really exciting.

The post-Grammys tweeting went so far as to inspire the Who Is Arcade Fire blog and the response video, Know Who Arcade Fire is or Hipsters Will Kill You. What do you think this says about your fan-base? Were you flattered? I think the video was sort of a joke.

Oh, definitely. I think there are people who are super into us, which is amazing. It's pretty amazing to be able to play music and have people be that supportive about it. That's what I take away from it. The Who is Arcade Fire thing is like, you know, that's fine. I wouldn't expect people to know who we are, and I think lots of people have heard us now. I think there's probably more people now that heard about us that did like us than people who were like "what's this about?" you know? I also don't necessarily expect that a thirteen-year-old girl who loves Justin Bieber is going to be that excited that we win. Which is fine.

It's interesting because there was such a big response in that direction but then there was an almost bigger reaction of bafflement, like, "How can you not have heard of them at this point?" It was really interesting, culturally Yeah, it's funny. It also just goes to show just how many people are in the world right now. We're doing an arena tour and we play and lots of people come, but there are still lots of people who haven't heard of us. It's crazy how big the world is.

Arcade Fire - "The Suburbs" The Wilderness Downtown interactive film was really interesting and innovative in that it used advanced technology, which we often think of as cold and impersonal, to make one feel nostalgic of their past in a very intimate way. What inspired that concept and that video? It was this guy named Chris Milk who directed the video. It was basically his idea, actually. He came to us with the idea, and we loved it. I think his whole idea was sort of crossing the newest technology with this kind of nostalgic thing and seeing what kind of a response you could get. I think he did an amazing job. It's pretty crazy that you're just watching web screens, but it is kind of an emotional thing. I think that was really what it was, it was just about nostalgia and technology.

While recording Suburbs, did you feel that it was a more accessible record than your previous ones? Do you feel that way now? Not necessarily. I mean, it's a dense record. It's sixteen songs and when we were doing it, when we finished it and listened to the whole thing, I was like, "wow, I wonder if people will be able to listen to this whole thing..." [laughs] I mean, I love it. I think it really works well together, but I was aware that it's a really dense record. I don't think the songs have become more accessible necessarily, I think Funeral's actually a pretty accessible record as well. [On] this record, I think we have more skill or whatever... we've been playing in the band for eight years now, so just from touring and stuff we play more solidly. So I think in some ways, we're more cohesive as a band. I don't know if it's more accessible, it's hard for me to say that.

In a time and a culture where albums are often conceived as more a collection to pluck singles from, what motivated Arcade Fire to make a cohesive concept album? It wasn't actually necessarily a concept album, although I can see why it's looked at that way. All of our records are certainly sort of thematic. I think we all just always related to albums like that, and all of our favorite bands have put out records. It's all been about records. It seems like when we write songs, they sort of come in these chunks. It's not like we just write one song about this and then one song about that and then another song about that... although that happens, it does usually seem like "oh this group of songs seems to work together," and that becomes a record. That's part of it. It seems generally if we're working on something, if we're writing songs over a course of a month, then those songs will have a similar something running through them, a common theme.

On that note, have you been writing over the past few months? Or has there not been time? Yeah, we actually finished our last tour in December. And then through February and March, when we weren't doing the awards stuff, we were actually doing quite a lot of writing and just playing and working on new stuff. It's been really good. [For] the last couple of records, we toured and toured and toured, and then we were all burnt out and would take a big long break and would start writing again. So this time, we decided to break it up a little bit and do some writing in the middle, and I think it was a really good idea.

Are there any new songs that we haven't heard that are prepared for this tour? There might be. I'm not sure yet. There are a couple... yeah, there's definitely some stuff we're close to playing, if not ready. I can't promise that we will, but there's certainly a chance.

How did "Scenes from the Suburbs" come to be? What was collaborating with Spike Jonze like? We met Spike quite a while ago, on our first tour. We talked to him a bit, and he ended up using "Wake Up" in the trailer for Where the Wild Things Are, and he mentioned that he would be really into working with us on a video or on something because we let him use that song. And I think he was into the band, too. So, him and Winn and Will came up with the script, and then we shot it in Austin last May. It was amazing. He has great energy, and it's really fun to work with him. It was really cool to see him kind of in action doing his thing. It was a really amazing experience.

Arcade Fire's stopping in St. Louis in a few days. What's differentiates this tour from previous tours? We just came off of a big break, so we're actually all pretty excited to be back out again. Not that we're not excited other times, but I feel like we have kind of a new energy right now. We've changed our stage setup a little bit too, so it's kind of a new show. Those are the big things. We might be throwing some new stuff in, too. So that'll be fun. I'm excited to come back to St. Louis. The last time we played there was a lot of fun.