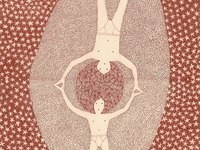 Tomorrow night, Fire Dog will celebrate its fifth year with an EP release show at Off Broadway. Expect enthusiasm, feet washings (you'll just have to find out...) and dancing. But the fun won't all be frivolous: The EP was recorded as a tribute to Dave Hagerty, the spirited frontman of Fattback, who died last fall in a hit-and-run car accident. The release is anchored by a song written by Hagerty called "Jorge," featuring guest performances from Hagerty's girlfriend Ellen Cook and his Fattback bandmates. Listen below.

Cook first played the song at a Dave Hagerty benefit. He had played it for her once and even at the time, she knew she wanted to keep the song for herself. Fire Dog, in a raffle to help with the Hagerty family's medical expenses, won studio time at Firebrand recordings. Frontman Mark Pagano decided to ask Cook if she would come in and record "Jorge" with his band.

Ellen Cook: I found the lyrics in this notebook and just sat down and decided to play it. When I first played it out it was at the benefit for me and Dave's family, and when I sang the line, "If you're here to save my life," I could barely... He inspired everybody. Everybody and anybody he met. Whether it was hosting open mikes or just... being himself.

The moment I knew: We were at a Fattback show at Off Broadway, and I it was New Year's. He was playing guitar and John Joern was playing drums, and they switched, and I said, "

Mark Pagano: He had a real sensitivity in dealing with people, and as a musician. You could tell, he would just be able to sit in and really listen. I thought he was a really good listener and he could find himself the space to add to musically.

Cook: There are a million things that I want to remember about Dave. He quit his job to become a full-time musician. He said you have to act like it's already happening. I would always complain about booking, getting a band together. And he had this way of never complaining.

Pagano: He was truly original in his musical approach and in his character.

I missed my last chance to see Fattback. It made me realize how valuable every little musical moment you have is. It really made me want to go out and be in the scene and see as much as I can, because everything has a temporal quality to it.