Memories of Danny McClain from Friends and Family

In this week's RFT, we profiled Danny McClain, the mind-blowing local musician who passed away on March 28 at the age of 31. To further honor his memory, we invited some of his friends and family to share their favorite Danny McClain stories with A to Z.

Mary Ann Starr, sister: Danny got a Fraggle Rock drum set for Christmas when he was 6 or 7 years old. Our parents let him play in the garage and for a few hours a day. They had to put a limit or he'd play all the time.

Matt James, childhood friend: Danny and I had a Saturday ritual. His mom would take us to every thrift store and record store in the entire city and we'd pick up whatever used cassettes we could find and collect Ramones and Black Flag records, then we'd spend the evening watching [punk documentary] The Decline Of Western Civilization for the 40th or 50th time and eating pizza. This went on every Saturday for about two years.

Starr: He was always interested in things other kids weren't interested in. He loved movies. One of his favorites was Rocky Horror Picture Show; he and my mom watched that movie every Friday night for about a year. And he would write these very intellectual, eloquent movie reviews when he was nine years old. He came up with his own grading system. Movies would get up to four stars, and zero stars was a turkey, like a little drawing of a Thanksgiving turkey.

James: We started a band doing Ramones and Nirvana covers. Our first show was at the junior high talent show. We did "About A Girl" by Nirvana. It was especially cool because somebody set up the amps for us and had them up way too loud, and it turned into an overdriven feedback mess for three minutes.

Starr: He was thirteen or fourteen when he started his first band, Detox. It was like, four eighth graders and they were just kind of finding their way playing noise punk. He was a really mature kid. When Danny was fourteen he was in a band, he was playing shows and he was making zines. He was always very serious about [music].

Jesse Johnson, former bassist of Johnny Angel and current keyboardist for Motion City Soundtrack: Danny was one of the funniest people I've ever met. His dark sense of humor definitely shaped what I still find funny to this day. For my 21st birthday Danny and our friends went to Chuckie Cheese and played around in the ball pit and took photos on kids' rides before going outside and jumping in puddles like children. Since our pants got soaked, by the time we met our friends at Del Taco, Danny and I strolled in nonchalantly with shoes, shirts, and underwear. No pants.

Starr: We were really close in age and knew how to push each other's buttons. He would follow my friends and I around and be like, "Hey Mary Ann, I'm going to tell mom that I saw you smoking unless you give me a dollar." But a few years later, I remember telling my mother that I really like my brother, and she said, "I've been waiting my whole life to hear that."

James: I went on tour filling in on guitar with Johnny Angel. We had shows booked in Canada, and ran into some trouble when we attempted to cross the Detroit Windsor Bridge because two of the guys in the band had brought a fairly large amount of fireworks. The border patrol took our amplifiers apart to search them for drugs, read our journals, kept us in a holding cell for 12 hours, confiscated the Johnny Angel tapes and records and read the lyrics to make sure they were appropriate for the Canadian people. After all that they said, "Okay, you guys are free to come into Canada." Then we drove to Quebec City and played for two people. 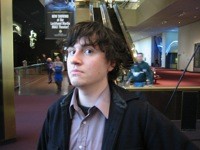 Starr: Grand Ulena was more offbeat than Danny's earlier bands, but they knew more of what they were doing. I thought it was awesome. Like, his band opened for some band at The Pageant [Wilco] and there were these people in the audience who were heckling them, like "Why don't you try to play on rhythm?" I wasn't surprised that Danny would end up playing stuff like that because he was always unique. I would never expect Danny to grow up and play something like...I don't know, what's that douchebag from American Idol?

Gray: He would do all kinds of - I don't know what you would call it - false soloing. Previously to us, a solo was something that highlighted your skills or show off in front of people. It was certainly a big part of Danny's idea to reverse that and have the solo be the part where you completely fail in front of people. It gave it a human element that a lot of musicians who are very precise and exact sort of lose. He would take a solo for three or four minutes that was just a failure. Everybody wants to be a great musician and play great in front of people, and to be able to reverse it was just very brave and very unique. To me that was really funny. He was definitely the Harpo Marx of Grand Ulena.

Bob Adams, drummer of Ten Grand: On tour, some of the shows were not as good as you'd hope, or they really sucked. We realized that Danny and [Ten Grand's] guitar player Joel looked very similar. They had the same hair and wore similar clothes. Whenever we'd have a bad show, Danny would get off the drums mid-set and Joel would get on the drums. Joel knew the songs well enough to fake it, and people would be really confused. "Is that the guy? Wait, that's not the guy, is it?"

Shane Perlowin, guitarist of Ahleuchatistas: We played a gig with Grand Ulena in Asheville in 2003 and I was completely beatific during the entire duration of their performance. Danny was wearing a hair net and looked like a total badass.

Adams: I remember we were in DC and we stopped at the Smithsonian. He was just so excited to be at a museum. They had this infrared heat camera and you'd walk in front of it and on the big screen you'd see the image of your heat, kind of like in the movie Predator. I took a picture of the huge screen, and when I looked at the picture there's the outline of all these little kids and this little blob in the background is Danny. He wasn't even joking around being funny for us. I didn't know he was there, I just happened to catch him being like, "Woah, this camera is awesome!"

Gray: Sonic Youth played at The Pageant when my friend Jim [O'Rourke] was still in the band, and Danny and I were backstage after the show. There was a handful of people outside between the venue and Sonic Youth's bus waiting to talk to Jim, and he was really dreading going out there. So Danny says, "It's cool, Jim, I'll do it." He puts on Jim's sweater and runs outside and just high-fives everybody waiting outside and then just jumps on Sonic Youth's tour bus!

Joe Raglani, musician, friend and organizer of McClain's memorial fund and concert: Danny and I were at a party and there was this baby chair, like a plastic little booster chair and he started dancing with it. He was wearing some fedora and he had a ponytail, and he started this whole dance party with this baby chair. He was smart and funny in an infectious way. Either he'd be the life of the party or you'd want to punch him in the face.

Gray: Danny probably would have been a great singer or lyricist, he was really great at turning phrases. He thought one Grand Ulena song sounded like futuristic ragtime and he described it as "Total Joplin," which we used as the title. No one else would ever say that. Our practice space was completely filled with mottos Danny would say. My favorite one he ever came up with was "No excuses, no reasons." It was written right behind where he sat and sometimes he'd just point to it with his drumstick. I mean, if you don't have excuses or reasons you're just left with doing it. It's a hard motto to live by, but it's something I still aspire to today.

James: Danny was the groomsman at the wedding, and he was super supportive and so genuinely happy for my wife and I. The last time we really talked, I told him we were having our first kid and he was talking about getting to be the cool uncle. It was such a sweet sentiment and I knew he meant it. That just sticks with me, the caliber of his quality.

Starr: We always liked this movie Mask about Rocky Dennis, and at the end when they're visiting Rocky's grave they play the song "Ripple" by the Grateful Dead. Danny had always been kind of touched by that scene. It was one of the last movies he watched with my mother before she died, and they both got very teary. We watched the movie together recently and it was very emotional. That is one of the last memories of my mom. At the wake, I sat by his coffin and sang "Ripple" to him.

James: Looking at the Facebook page that his sister is maintaining, everybody on that page refers to him as their best friend and recalls about how they all had inside jokes with Danny. That was something special about him; when you hung out with Danny, you felt like it was you and him and that was it. And I know everyone who says he was their best friend really believes it. He was able to cultivate these special relationships with people and it's a really remarkable thing.

Joel Anderson, guitarist of Ten Grand: I loved the spark he had. Because he got taken so soon, at least it brings me comfort to know that he didn't dilly-dally. He didn't waste time. He didn't get hung up on the minor details of life. He was able to really get at it and make the most of the time he was around.

Starr: I just would like to comment on the benefit concert his friends organized, that they cared about me and my father and that they wanted to help my family. People brought food, people have been calling and people I don't even know have getting in touch with me, saying, "We miss Danny, but Mary Ann, how are you?" And I want to say how grateful I am and how happy I am that so many people loved him. He and I were much more than best friends, it's like if you remove all the romantic connotation out of the world "soul-mates." I loved him with all of my heart and I will miss him for the rest of my life.