Kanye West loves dropping movie quotes into his lyrics. With plenty of rhyme but no reason Kanye manages to draw from an impressive range of cinema: everything from Will Ferrell's Anchorman: The Legend of Ron Burgundy to Spike Lee's Malcom X. Seriously, what kind of mad genius manages to drop a Happy Gilmore reference in a song about Jesus? Kanye West, that's who.

And with his headline-grabbing persona of madness and absurdity rivaled only by Mr. Johnny-Come-Lately Charlie Sheen, West is tailor-fitted for movie stardom. With that in mind (and considering Hollywood's love of rehashing the classics), we put together these posters touting some potential remakes that would benefit from a little dose of Kanye. We present to you Hollywood, Kanye West style...

8. The Trouble With Angels

No one took the religious undercurrent of West's music as seriously as he would have liked. Until now...

7. Harry Potter and the Goblet of Fire

If you thought the AMA and Grammy snubs ticked him off, then just wait and see what happens when Kanye fails to claim the coveted Triwizard Cup. 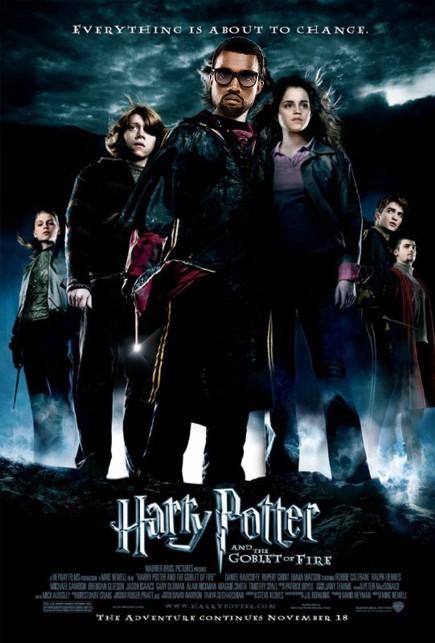 I'm pretty sure this ain't mine. Where's Maury at?

4. Lord of the Rings

Chill the fuck out! I still got this. Seriously though, this is a lot of walking.

3. Harry Potter and the Order of the Phoenix

Phoenix? Can we move this to Miami? Have you seen the asses down there? Plus, I'm pretty sure the sunlight would just wreck Voldemort all up.

Don't even try to take my shit.

It's about time that I'm the king of the world! Damn we're sinking, hold me Leo.