The Raveonettes at the Firebird, Friday, April 8: Review

Check out the full slideshow of the Raveonettes at the Firebird.

The Raveonettes/Tamaryn The Firebird Friday, April 8, 2011

Better than: The government shutdown riot we were so hoping for.

There was nothing rotten about Denmark last night at the Firebird - the Danish duo of Sune Rose Wagner and Sharin Foo drew a full house, proving that sonic evolution doesn't always yield concert ennui when delivered with enough panache. The Raveonettes is effortlessly cool, and last night the band gracefully trod the line between maintaining affected rock star composure and playing with feeling.

Though Wagner and Foo played nearly every cut from their fifth studio release Raven In the Grave, the immaculately constructed setlist was peppered with enough of the old favorites to keep the crowd's interest. The new album as a whole is slower and more ruminative than the bubblegum garage that will always be synonymous with the Raveonettes. Over the past eight years, the band has established itself as a creative force in a constant state of flux - each album shows a new permutation of its sound, whether it's the roughed-up upbeat thrust of In and Out of Control or the manicured distortion on Lust Lust Lust.

The band opened with a trio of tracks off Raven, kicking off the set with gleaming album opener "Recharge & Revolt." Wagner led while Foo mouthed the words. The sinewy, slow-burn "War in Heaven" began with twinkling interstitial noise and built to a haunting instrumental bridge of shattered guitar and ceiling-grazing synth. They sped through the low-slung "Let Me On Out," a blistering anthem that owed its understated zeal to the thick wash of distortion.

"Dead Sound" was fucking magnificent, to say the least. The Raveonettes' live set up features two drummers this time around, and the two faced off, lending a percussive clarity to the heavily distorted proceedings. The unmistakable guitar lines of "Love in a Trashcan" and cinematic "Lust" elicited cheers from the audience; the former could have gone on for an hour and no one would have complained.

Wagner's bizarre falsetto on the phantasmal ode "Apparitions" bled into his delivery on another new song, the foreboding "Evil Seeds," which is brilliant on record, but live sounded like a poor man's Silversun Pickups. They picked up the pace with the righteous new wave tumult of standout "Ignite" and Hole-ish "My Tornado." "Attack of the Ghost Riders" sweltered and detonated into a reckless metal clash amid an apoplectic light show, and the two closed the hour long set with "Heart of Stone" and the dainty-cum-diabolical album closer "My Time's Up."

They waited a cool three minutes before taking the stage again for an encore - it was long enough for fashion plate Foo to exchange her heels for simple black flats. The encore was easy to predict: the sublime new single "Forget That You're Young" and the band's calling card "Aly Walk With Me." The straight-faced "Aly" showed Foo and Wagner at their best, employing simple lyrics leavened with a jagged instrumental heft. 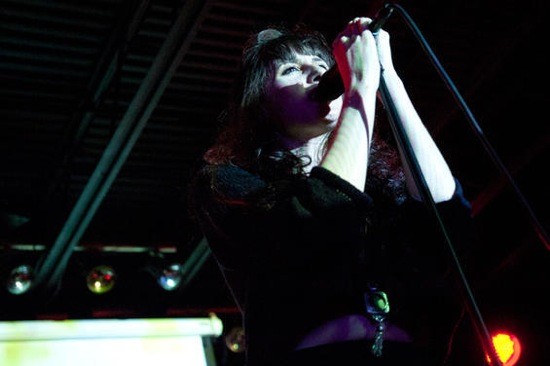 Tamaryn opened the show with her band's sultry shoegaze. Tamaryn's demulcent vocal tones floated over the blown-out guitar and scuzzy groove. Unlike The Raveonettes, which fully embrace maximal instrumentation with down and downer themes, Tamaryn kept the room at a well-controlled simmer. The singer, born in New Zealand, comes from the Victoria LeGrand school of smoky vocals and epic detachment; she never addressed the audience and spent the majority of the set singing through her hair. Still though, Tamaryn was spell-binding.

Critic's Notebook With the glut of bands copping The Raveonettes' Jesus and Mary Chain in the sack with The Ronettes style (Dum Dum Girls, Crystal Stilts, etc etc ad nauseam), it was nice to see a substantial crowd turn out for the genuine article.

After Tamaryn: "That was so good, I could leave right now."