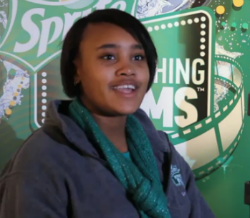 St. Louisan Tia Rounsoville is not your average fourteen-year-old. What she lacks in years, this high school freshman makes up for in ambition.

She recently won an opportunity, through the Sprite Refreshing Films program, to work with other students to create a short film. Each group was in charge of writing, casting and filming its own short. The films are competing in a bracket, and the winning short will be shown at a "major film festival" (TBA). Rounsoville spent a few moments of her half-day off from school talking with A to Z about her experience in the competition and her plans for the future.

Click here to vote for "Justice" through Monday, April 11.

Chrissy Wilmes: "Justice" is listed as the Chicago selection. How did you end up working with this group? Tia Rounsoville: With the Sprite Refreshing Films program, it's a contest. I filled out all the information, I wrote a short essay about why I wanted to be involved in the program. And I basically said because I wanted to have more experience with film. I'm not an expert or anything on film, and I said I would love to have the experience in working with other teenagers my own age who have the same desire to know about film.

Did you know any of the people you ended up working with, or did the program match you up? I knew no one. I was the only person from Missouri, but Sprite Films picks the individuals for each group.

You are credited as a filmmaker alongside ten other young adults. What did you specifically contribute to the filmmaking process? All of us basically did almost everything. I got to film a certain scene, I got to hold the boom mic -- that was actually my favorite, I have no idea why [laughs], but I really enjoyed that. I didn't do much editing, but I helped with costumes, also. We mostly contributed everything and we worked in small groups doing certain things on certain days.

How long did the entire filmmaking process take? We only had seven days to make the short film. And shot day was the last day that we were there.

*The making of "Justice" You mean the actor who plays the comic book clerk? Yeah, he fell down the steps, and I wondered if he could fit the character's background He ended up doing it perfectly, so we casted him for that role.

Is this the first film you've worked on? Yeah. This was my first time ever working with film. I like photography, but I wanted to try something different, and I wanted to know more about film. So it was a wonderful experience for me.

When did you know you wanted to be a filmmaker? My friends have a whole bunch of stuff on Youtube, so I've always wanted to do a web show. I also wanted to be involved with My Web News (her school's webcast), but it was full. So I guess around this year.

What are your hopes for the future as far as filmmaking goes? I plan to try to incorporate filmmaking into my business career, because I want to be like an entrepreneur and start my own business -- something that has something to do with the arts. Also, I would work more with my school with our web cast program and the newspaper.

I would like to say that the company that helped us, Dreaming Tree Films, was wonderful. They were awesome. Everyone there in the program I've gotten really close with and enjoyed working with. Even though we're kind of spread out, state to state, I still plan to contact them and see how everyone's doing. I would recommend this program to anyone who wants to have a new experience with film or finding a way to express yourself and be creative.