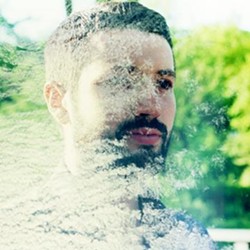 It's hard to imagine vocals so beautiful and delicate could come out of a man resembling the Brawny Paper Towel guy. But the vocals of Sean Carey (a.k.a. S. Carey) slowly hummed to life and melted over the audience who came out to Off Broadway Monday night.

Carey made one final stop in St. Louis on the tour for his first solo album, All We Grow, which was released last August. He might not be a household name -- as a member of Bon Iver, he stayed mostly in the background as drummer and supporting vocalist -- but it's clear after his solo performance that his hauntingly echo-y vocals will soon be buzzing out of headphones everywhere.

Like Bon Iver, S. Carey's music starts at a slow, crawl. The low growl of an upright bass rolls across the stage as a light drumbeat starts to bring the song to life. But unlike the clear lyrics of Bon Iver's Justin Vernon, most of Carey's vocals melt together -- nearly undecipherable yet still disarming.

The show began with two great performances by the local groups Dots Not Feathers and Blood Pony before Carey and his band climbed onto the small stage. The sound of two keyboards, a saxophone, clarinet, upright bass, electric guitar, drums and, of course, the lush vocals of Carey himself reverberated from the stage.

He began with the Grow song "Move." Seated at his keyboard, Carey taped out a couple of notes to get the song started as the bassist dragged his bow across the strings. Warm, haunting vocals floated out over the audience. The sound resembled the eerie melodies of the Iceland post-rock band Sigur Rós.

Most of Carey's songs were largely instrumental and even paced, but the thump of the drums gave each a definite heartbeat. He dedicated his third song to the Gateway Arch. "Just kidding," he said. "It's probably not that funny if you live here."

The rest of the show continued with more smooth vocal stylings, which warmed the dimly lit venue. Lumbering rhythms were rounded off as crescendos built before the song tapered off. This seems to be Carey's style -- lead with a methodical tempo that raises the hair on the arms before building, building, building the tempo to reach that climactic beat, then fade out.

Carey announced his last song, "Leave" by saying, "It's a good closer but kind of awkward. I might rename it 'Come to the merch table.'"