Review: All Time Low and Yellowcard, The Pageant, Monday, April 4 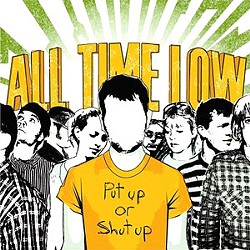 When All Time Low headlined the sold-out Pageant last night, the reigning princes of bubblegum punk seemed bent on taking their young audience to an all-time high. The full bill, which also featured Yellowcard and up-and-comers Hey Monday and the Summer Set, kept up the energy with polished, uptempo sets and just enough hints of naughtiness to titillate the teenagers.

As this reviewer walked past the adolescent masses lined up outside for 5:30 p.m. doors, I was sent back in time. Nine years ago, that was me scrambling from the sidewalk down to the very front of the pit and pressing myself against the rail for Further Seems Forever (post-Chris Carrabba), Finch, Something Corporate and New Found Glory. Of these, only NFG is still an active band - and All Time Low took its band name from NFG's song "Head On Collision." This felt like a full-circle moment, people, and it freaked me out.

Leave Green Day out of the equation. Take Blink-182 as a given. How has pop-punk changed since the early '00s? And why is this music still resonating so loudly with American teenagers?

Speaking of loud, the Pageant vibrated with at least a thousand squeals after the Summer Set's...set. The audience screamed again when Cee Lo Green's unedited "Fuck You" came over the PA. And it squealed yet again when the lights went down and a comedic intro played: Dane Cook's "Just Wanna Dance" bit. Granted, it's a line that's become ingrained in millennial vernacular, but time warped again: Is it still 2003? What's my age again?

Cassadee Pope, frontwoman of Florida five-piece Hey Monday, bopped onstage and didn't stop until the end of a tight, appealing set. The twenty-one-year-old Pope has impressive pipes akin to those of Paramore's Hayley Williams, and she hit all the open-throated high notes with ease and great control - even while jumping and dancing all over the stage. Playing live, Hey Monday seems to fit right into the mold of mentors Fall Out Boy, but not much separates Pope's musical sensibility from that of say, her peers over at Disney. No bones about it: it's glossy pop with a jagged haircut. The whole concept is custom-made for a Twilight Saga soundtrack and attendant radio play.

Yellowcard burst out at 8 p.m. in a blaze of guitars and hyper handclaps with "Lights and Sounds." Violinist Sean Mackin was high-jumping (how does he do that?). Then the California-by-way-of-Florida quintet launched into "Way Away," "Breathing" and "Believe," back-to-back-to-back hits from its 2003 breakthrough, Ocean Avenue. The songs were still speedy and infectious, the frenzied violin tripped a fine line between cheesy and uniquely compelling, and the jam-packed pit sang along with every word. The only noticeable difference between this and the last time I saw Yellowcard (at the 2004 Vans Warped Tour)? Instead of menacing mosh pits, the crush of people was lit with glowing cell phones in the air, capturing and transmitting the data of live experience. Given the option, maybe it's not enough anymore to just jump up and down. Yellowcard went on to play two songs from its first album following its recent hiatus, When You're Through Thinking, Say Yes. While "For You and Your Denial" sticks to the fast-and-furious tempo and vague-yet-histrionic tendencies of the past, "Hang You Up" deviates slightly from the pop-punk formula with a more measured pace, mature lyrics and pulled-back delivery by vocalist Ryan Key. It's a melancholy tune, but less melodramatic. What angst there is feels earned.

Then came All Time Low. Last time ATL played in town, it easily sold out the Firebird. Here, the quartet got to employ all the showmanship at its disposal: a large stage to skip across, light-boxes and a drum platform off which to jump and of course, a substantial light show. The melodic caffeine rush never lagged for 90 minutes, though lead singer Alex Gaskarth and guitarist Jack Barakat (he of the bra-laden mic stand) built in plenty of time for goofing off and stage banter, which included lots of references to audience members getting naked and "going down" on each other - in the grand tradition of Hoppus/DeLonge wiener jokes.

All Time Low pulled most of the songs from 2007's So Wrong, It's Right and 2009's Nothing Personal; the lyrics contained light-hearted (but often bratty) details of young romantic attachments couched in racy references. At times, the band's sarcastic, upbeat tone reminded me of Fountains of Wayne's "Stacy's Mom" and the band Bowling for Soup, but ATL is much too aware of how cute it is to really compare to those puckish, self-deprecating bands. Before the regular set-closer "Therapy," ATL even delivered its own Lady-Gaga-style PSA: "Believe in whatever you want to believe in...love whoever you want to love...We do what the fuck we want!"

What can I say about the state of modern mainstream-ish pop-punk? To paraphrase Dazed and Confused, these bands keep getting older, but their fans stay the same age. What has changed in the last six to ten years? Well, um, not much. Just me.

So, young readers, tell us which music you love and why. The catchiest shit belongs to you now.