Shagy Kennedy (born Brian Michael Kennedy) died on March 8, 2011, after battling a rare form of cancer. He was 27 years old. Bandmate and friend Brandon Hoffman said that Kennedy passed away surrounded by friends and family. "He had put up an extremely hard fight, and never let it effect how he lived his life," Hoffman says. Kennedy is survived by his loving wife, Esther, and doting parents John and Judy Kennedy.

Kennedy was diagnosed with ASPS (Alveolar soft part sarcoma) in 2008, and his pals in the music community rallied around him, putting on benefit shows at places such as Fubar to help offset his medical bills. Tomorrow night, April 1, Kennedy's friends, bandmates and fans will pour into the rock club for a final hurrah to celebrate his life with a memorial show and concert. The night features some of the rawest, ballsiest bands this town has to offer: Fister, Orion Pax, The Humanoids and Kennedy's rocket-powered hardcore band, Everything Went Black.

Kennedy was heavily involved in the music scene in St. Louis. He worked at the Creepy Crawl before it shuttered in 2008, and played in A Thousand Nations and She Notes The Chariots before joining Everything Went Black in summer 2009. Kennedy was a full-time member of the band until about a month ago, when he chose to go on hiatus to focus on his health.

Hoffman said the band is going to keep soldiering on as a four-piece. "We started working on a full-length record, and we're going to use some of his music," he says. "We're going to keep it going for right now. I think he would want that."

Doors open tomorrow night at 6 p.m., and there's a suggested donation of $10. All proceeds generated will go to his family. 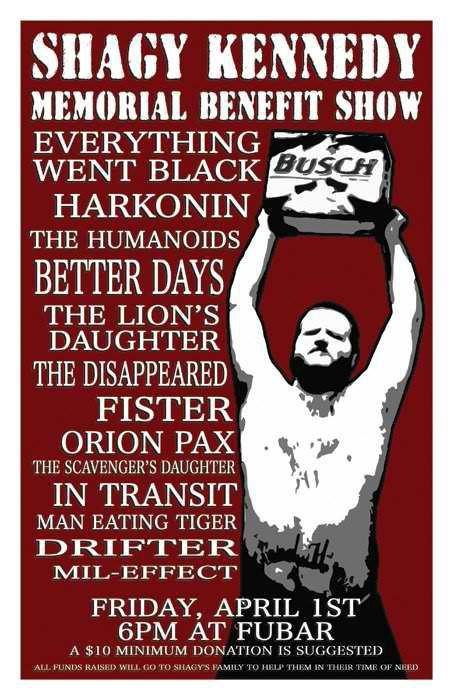