Contrary to some sad fans' misunderstanding, the Foo Fighters were not in St. Louis today. However, the sweet white ride emblazoned with the band's signature "FF" logo (the one featured in the "White Limo" video) was. 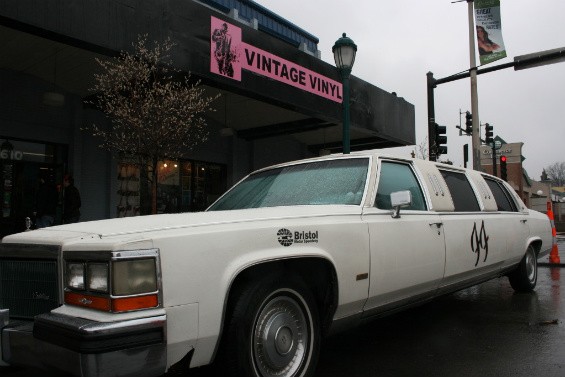 The limo rolled into town to promote the band's upcoming album, Wasting Light, out April 12. There was a listening party in Vintage Vinyl, and fans who pre-ordered the album at the event got a "White Limo" t shirt for $5.

A few devoted fans, unintimidated by the nasty weather, posed for photos with the limo and told A to Z what they thought of the new record.

"I thought it was great!" - Amanda Dale "It was cool to hear the new stuff. It's a pretty intense album." - Jennifer Ellis

"I'm dying for it to come out. I'm looking forward even more to Back and Forth, the documentary." - Chris Davis.

Taylor and Olivia, when asked what they thought of the new album, both responded "I really like it!" Sometimes, it's just that simple.