At the end of the final night at South By Southwest 2011, I walked down 6th Street, a scene you can surely picture without my assistance. But I have this press badge to earn, so: By 1 a.m. on Saturday night / Sunday morning, downtown Austin was a zombie movie scored as a Flaming Lips-ish experiment of 100 bass drums and 10,000 random club samples synched to the convulsive rhythms of vomiting. The cops stood before barricades, their horses scratching the beer-drenched asphalt, watching the current of the undead churn and rush in all directions as if tsunami driven.

This is not poetic license.

Zombies clutched their zombie friends for staggering support, zombies hurled cups full of ice and soda and flung promo CDs at other zombies (zombies are assholes), zombies made out in the street, zombies walked on stilts, zombies stood in line for the PureVolume party, zombies in animal-totem spirit hoods still had some bar or club or warehouse to see and be seen at, zombies consumed the unholy feast of red-pepper-flaked pizza slices. And I was a zombie too.

But even though Yoko Ono would soon be singing with her son Sean at Elysium, Deer Tick would be smashing guitars at its Nirvana tribute gig and Starfucker would surely be punctuating a 4-day-long party at the Parish, this zombie was as content as a still-vertical corpse could be. I'd just seen a charming, young, decidedly not undead quartet from New Orleans called Hurray For the Riff Raff. In the posh Victorian Room at the Driskill I took in one last weak cocktail (if you're in St. Louis and reading this, tip your bartenders for our drink prices and pours), sat on the carpet and heard a supremely casual yet somehow just-right and original take on old time blues and fiddle swing. Singer Alynda Lee Segarra, covered head to toe in glitter, plucked an old Kay guitar, beat fiddle sticks on Yosi Perlstein's fiddle and sang like she understood where this music comes from -- and where it needs to go if it is not to become zombified.

The same could be said for the rest of my highlights from the last two days of SXSW 2011.

Dum Dum Girls, Joy Formidable and La Sera at Waterloo Records. These three bands, all led by hip but not hipster females, played under the Friday afternoon sun on a free stage, and all three moved me, somewhat unpredictably. Dum Dum Girls transcend fishnet fashion with precisely played and distorted girl-group pop, with all the hooks of the genre, and enough sex to give the front row the kind of hard-ons known only to 22-year-old indie kids. Joy Formidable, in contrast - though a prolonged lunch break meant I'd only hear its finale - super-collided the shit out of thrashing pure punk, all the way down to their knees and asses. Ferocious and never to be missed again. In further contrast, La Sera (AKA Katy Goodman of Vivian Girls), simply sang two-minute pop songs and smiled sweetly beneath a bonnet and before her stripped-down rock combo. "I almost couldn't finish that song," she laughed and gestured to a guy in a ripped shirt in the crowd. "I was distracted by your nipples." 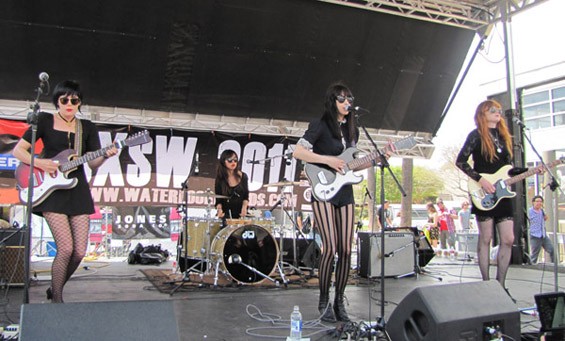 The Vaccines at Stubb's. On the night of the notorious OMD show, before which a video camera boom collapsed and caused multiple injuries - I didn't see the accident, but I did see the camera swoop so low that cables brushed the heads of dudes of only average height - I gave UK band the Vaccines a chance during its early Friday slot. The foursome had a few memorable moments of wry and bitter guitar rock, but excessive camera posing and somewhat cloying vocals and choruses from Justin Young sent me headed for the gates early.

The Moondoggies at Red 7. This Seattle band released a terrific debut, Don't Be a Stranger, in 2008; though they haven't capitalized on that momentum, the new, country bluesy material featured in the sweltering and shitty-sounding space of Red 7 suggested that they may still find an audience that includes more than be-flannelled alt-country heads.

Josh Ritter at St. David's Sanctuary. At SXSW, the best place to see a song-focused show is the Episcopal Church of St. David's. The sound is exquisite, even with a slightly buzzing PA, and Josh Ritter took advantage of it, focusing on newer material, and requesting the lights go down, as in completely down, for a tingling sing-along in the dark.

Lucinda Williams at ACL Live at the Moody Theater. Count Lucinda out at your peril. Her new album, Blessed, is remarkable, a genuine return to form; however, for this ten years of Lost Highway Records party, she focused on older material, including gripping versions of "Pineola" and "Drunken Angel." In a genre full of bad dancers she's the worst, and for reasons that remain opaque, her backing band choices have become as misguided as her jam-oriented set lists. Drummer Butch Norton broke sticks like he was in a Motorhead cover band and the guitarists flirted with the wank during bad songs "Honey Bee" and "Righteously." Still Williams' voice was in superb form, scratchy Southern soulful enough to redeem the clichéd choice of a finale, "For What It's Worth." "Peace, love and revolution," she said. Her best songs can still make you believe it.

Venice Is Sinking at The Ghost Room. My first show of Saturday night took place in a small club on 4th Street, where Athens, Georgia band Venice Is Sinking reminded me that indie folksy rock need not be dull. With violin, subtle harmonies and trumpet on a cover of Galaxie 500's "Tugboat," the band hit my wheelhouse.

Eli "Paperboy" Reed at Phoenix. At the most douchey club in all of Austin, this Boston-based neo-soul singer did his best to elicit some signs of life from the open-bar-buzzed muckety-mucks at Mark Cuban's HDNet party. The talented kid did just that, with a crisp drummer, crisper horn section and a ton of Motown hooks.

Brandi Emma at Tap Room at Sixth. I had no intention of seeing this Silverlake, California songstress - I'd come for the Damnwells, only the schedule had been pushed back - but I was glad I did. Her band nailed an easy-going California rock sound and her voice and songs suggested Maria McKee. SXSW always has unexpected pleasures; Brandi Emma was more than one of many.

Asobi Seksu at the Parish. Late to Asobi Seksu's recordings, I arrived early for the band's final South By set at a packed 6th Street club. I wasn't prepared for the My-Bloody-Valentine-meets-Yo-La-Tengo squall of guitar, keys and sexy vocals from Yuki Chikudate. A handful of new songs and a blissed-to-the-rafters "Strawberries," floored me, and the whole joint.

KDHX and Twangfest Day Party on Saturday at Jovita's. Disclosure: I'm an 88.1 KDHX DJ and Twangfest volunteer and I had a few beers, but the 12th annual SXSW parties boasted strong and diverse lineups, with Saturday's highlights including a manic, Clashed-up cover of "I Fought the Law" from the Waco Brothers, a shredding cover of "1952 Vincent Black Lightning" from Sean Rowe, a glowing cover of "Wichita Lineman" from Freedy Johnston and Susan Cowsill, a cello-drenched suite from Cobirds Unite (led by Rachel Flotard of Visqueen), some indie jamming from Thao With the Get Down Stay Down, gorgeous singing from Caitlin Rose (who suggests a dreamier Laura Cantrell) impressive bourbon punk blues from St. Louis' Kentucky Knife Fight and a guest vocal from Asleep at the Wheel's Elizabeth McQueen (very pregnant with her second child) to close out a warmly received set from Brothers Lazaroff, also from St. Louis.

And while the outdoor stage at Jovita's had been shut down by the fuzz (there was a bit of that going around this week; even the parties at Home Slice Pizza had to go unplugged), the event organizers made two indoor stages work. When The Fleshtones jumped into a geezer mosh pit to do push ups and Kasey Anderson closed out the afternoon with hard, loud twang-blues, I was happy to have been invited to a great party with great people. Not a zombie to be seen, not a care on the horizon, just the thought of waiting 360 days for SXSW 2012.