The Real Story Behind Sammy Hagar's Unpublished Autobiography, The Long Road to Cabo -- And Its St. Louis Connection

Sammy Hagar's autobiography Red: My Uncensored Life in Rock (published earlier this week) has been a long time coming, but then again, Van Halen fans are very accustomed to waiting. (See also: a new Van Halen album - there hasn't been one of those since 1998!) As co-author Joel Selvin noted in an interview with the RFT, it was victory at last for Hagar, who had made two prior attempts to get his life story on paper.

Hagar spoke in a 2000 interview about The Long Road to Cabo, an autobiography that he was writing with Dick Richmond, a Belleville resident (where he has lived since 1957), writer/author and longtime friend of Hagar. Richmond was wrapping up an impressive 43 year career at the St. Louis Post-Dispatch earlier that same year. He began his tenure at the paper in 1957 (after leaving the Air Force) and held a variety of positions through the years, many of them related to entertainment and popular music. Richmond spent the last five years as production coordinator for the Get Out! magazine when he proposed the idea of the book to Hagar.

Sadly, The Long Road to Cabo never came to pass (although the name itself eventually wound up as the title of a 2003 DVD retrospective) and the book, like so many other things in VH history, has become an unsolved mystery with fans. So what happened with The Long Road to Cabo?  We did a little bit of detective work and got the answers directly from Dick Richmond himself!  Richmond was kind enough to answer some questions and sent a letter (via email) with insights regarding the book and Hagar's love affair with St. Louis. In his own words, here's what happened.

Sam and I have known each other since 1977, and have been friends almost from the beginning.  We connected, in part, because we both came from modest circumstances and both of our fathers had been steelworkers. In a sense, we actually started working on The Long Road to Cabo then. Sam was with Capitol Records in 1977 and was still years away from being a star attraction. To do the interviews necessary for the project we had in mind then, he came into town for two weeks with his first wife, Betsy, and their son, Aaron.  I put them up in the Chase-Park Plaza Hotel, and we did interviews on a daily basis.

His close connection with St. Louis was about to start.  This was in the early days of KSHE Radio, and the genius running it at the time was the late Shelley Grafman. Shelley and I had connected because I had written about the station, and when my treasure-hunting books were released, he was kind enough to have on-air personality Ron Stevens interview me to promote the books on each occasion.

Because of this association, I asked Shelley if he would consider giving Sammy a boost.  Not only did Shelley play some of Sam's music on an on-going basis, he had him come in several times during those two weeks to be a guest disc jockey.

This is not to say that this is what created the love affair between Sam and St. Louis.  There were a number of people who helped in that regard, most notably Wayne Meisenholder and David Burd, who were then local representatives of Capitol Records, and Steve Schankman and Irv Zuckerman of Contemporary Productions [Editor's note: Here's a photo featuring all of the individuals mentioned, captured backstage in St. Louis at a 1979 Hagar co-headlining date with Boston.]  In reality, it was Sam's winning personality and hard work that  created this bond with the city. Even so, the individuals just mentioned saw the star quality in Sam, and his willingness to do what was necessary to bolster his then-budding career.

After Sam and his family left St. Louis in 1977, I went to California to interview his mother and sister Bobbi.

The project in the '70s fell through when Ed Leffler, Sam's manager at the time, put thumbs down on it.  It was from the late Ed Leffler that Sam learned much of the excellent business sense that he commands today.

Of all the taped interviews of famous personalities I conducted through the years, the only ones I kept were those I did with Sam in 1977.  I can't even tell you why I stored those in a safe place, but I did.

Over the years that followed, Sam and I would get together whenever he came to St. Louis.  He would elaborate on how his career was going and I'd fill him in on my most recent adventures and the projects of which I was then involved.  We were forming a bond of trust.

When Sam and I decided to write The Long Road to Cabo, it was at my suggestion, but it was one in which he participated enthusiastically.  He flew me to Cabo, and put me up in one of the palaces on the Sea of Cortez a short distance from his home there.  It was in Cabo that I interviewed his current wife, Kari, and his brother, and, of course, many additional interviews with Sam.  From there, he flew me to California, where I once again interviewed his mother and both of his sisters. Sam's mother was a wonderful source of information, some of which Sam found embarrassing. 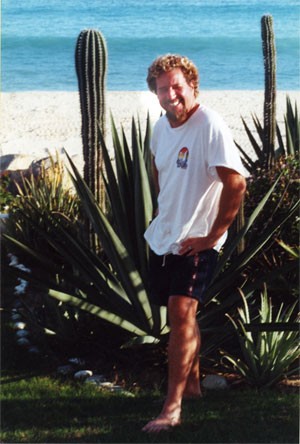 Later, I traveled with him a bit and then stayed at his Marin County home for a few days during which time we covered a lot of intimate material that really enriched The Long Road to Cabo.  From there, I drove to Carmel by the Sea to interview his first wife, Betsy, and his two sons with her.

As I began writing, the interviews continued by phone. As I would complete a chapter, I would fax what I had written to Sam for his approval and we would go on from there.  It was a 14-month process and the result was an in-depth look at his life from babyhood to the present, for which he wrote me a thank you note for a job well done. The Long Road to Cabo was all from Sam's point of view - a 500-page autobiography with a lot of details about his early life, and the breaks that followed.

We actually had a publisher for the book in a sweetheart deal when I received a phone call from Sam, saying "Dick, I'm sorry but I just signed on to do a tour with the Van Halen brothers and the deal had a no-book clause."

I was disappointed, but I understood and put the manuscript away.

In the meanwhile, Sam had become a noted businessman as well as a rock star and said he was no longer interested in having people know so much about him.  I understood that, too.

I did interview him again for my latest book, Produced By Contemporary, which was released in 2008.  In it there is a photo of Sam and me together.

Sam always sends a limo for me every time he is in town.  So we saw each other last year when he appeared at the amphitheater in St. Louis. Kari was with him then.

Project-wise, my son, Paul, and I have written a musical called Nobody's Fool.

I was at the Post-Dispatch for 43 years, the first five with United Press International.  I retired June 1, 2000.

I think I've covered all of your questions.

Editor's note: Hagar gives his old friend Richmond a nod in the acknowledgments for Red, thanking him "for helping to write this book."
All photos provided by Dick Richmond and used with permission