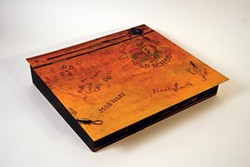 Alice Cooper's having a pretty good week. On Monday night, he was inducted into the Rock & Roll Hall of Fame. (He wore a snake for the occasion.) And this morning, he announced the June 2011 release of a monster (pun intended) boxed set, called Old School 1964-1974. Packaged in a replica school-desk box -- see it to the right -- the set has four CDs, a DVD, a "bootleg vinyl" and a 7-inch, along with a book, a 64-page booklet and other assorted goodies. (A list of the specs can be found below.) Even cooler, though: One of the CDs (and the "bootleg vinyl") is a 1971 show from the "Killer" tour, recorded right in St. Louis. This appears to be the December 17, 1971 show at the St. Louis Arena, a widely bootlegged show. The set isn't cheap; it retails for $260. But for fans, it's a goldmine.

[Note from commenter Tom C.: The Cooper show wasn't quite at the St. Louis Arena, but "at the Arena Annex, a building to the east side where the Blues parked their cars. Shows there were general admission and and if you got there early enough, you sat on a ratty old piece of carpet instead of the concrete floor. The openers were Pacific Gas & Electric and Dust."]