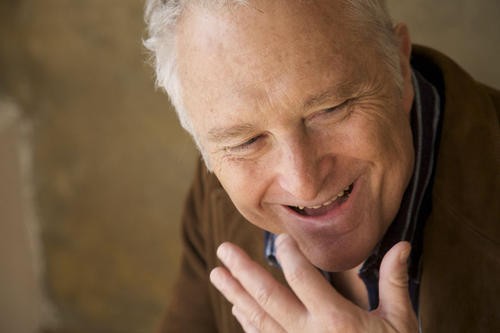 Normally, there are very few surprises at a Randy Newman show. Long-time fans know what to expect: the sui generis singer-songwriter-composer will sit at the grand piano for a few hours and give a guided tour of 40 years worth of songs. He'll offer stories and background details that are often laugh-out-loud funny. He'll come off as believably modest and self-deprecating by the show's end, as if the many gems from his songbook -- songs that are satirical, sentimental, trenchant and often heart-breakingly tender -- were just some old tunes he had lying around. As such, Randy Newman's nearly sold-out performance at the Sheldon Concert Hall was almost free of surprises (save for a medical emergency off-stage, but we'll get to that). But in the place of unpredictability, the attentive crowd was treated to a master-class in American songwriting.

Ambling onto the Sheldon's tiny stage in a dark, shabby suit, Newman said a quick "hello" before launching into the rollicking "It's Money that I Love," a song he referred to as a "spiritual number" to kick off the evening. He followed it with another early song, "Mama Told Me Not to Come," and both sounded a little rushed in places. But Newman's piano-playing hallmarks - his easygoing sway and Louisiana shuffle - didn't take long to lock in. And while that modified barrelhouse style drives many of his songs, his more naked ballads require little more than slow, open chords from his left hand and simple, sympathetic melody lines from his right hand. The gorgeous "Living without You" was an early example of this method, though he'd return to it for songs like "Real Emotional Girl" throughout the set.

Now, one doesn't attend a Randy Newman show (or purchase a Randy Newman record) to hear spot-on, opera-ready vocal performances. The best thing you can say about Newman is that he's had an amazing career in spite of a lovable, iconic but ultimately limited voice. So it's something of a facile criticism to note that his voice was faltering across the upper registers last night. In places, though, it worked to his advantage: The love song "Marie" took on a husky tenderness as he reached for the high notes. From where I was sitting, it sounded less like a struggle and more like real emotion.

Newman's 34-song set list didn't linger too long on his most recent album, the lovely Harps & Angels, though an odd, slightly terrifying bit of synchronicity occurred when he played the title track, which ruminates on death and a premature visit to St. Peter's pearly gates. A gentleman sitting stage right fell to the floor, which led to some commotion as paramedics were called and the man was attended to. Newman, with his back to the scene, continued playing his song about sudden death. He ended with these lines:

My heart begin to pound
It was arrhythmic and out of tune
I lost my equilibrium
And fell face down upon the ground.

Newman soon became aware of the situation and truncated the song, realizing that such mordant ruminations on mortality might be out of tune with the situation. He quickly began the silly, lighthearted "Simon Smith & the Amazing Dancing Bear" as the patron sat back upright and remained in the concert hall until intermission. "We Belong Together"

After intermission, his set continued to traipse through nearly every facet of his career, with more attention paid to his movie soundtrack work. "You've Got a Friend in Me," from Toy Story, was paired with a story about how studio execs often tinker with his songs to bring in more "liveliness," as he put it. He gave a snippet of "We Belong Together," his Oscar-nominated contribution to Toy Story 3 that he'll be performing at Sunday's Oscar awards.

The show was entertaining throughout the two-hour performance, but it hit its stride as he dipped into biography with "Dixie Flyer," a remembrance of his boyhood in New Orleans. He lingered in the South for a moving "Louisiana 1927," which began a mini-set of songs from his landmark Good Old Boys album. "Rednecks" came next, and Newman offered something of an explanation or apology for what he termed the "vulgarities" of the chorus -- "we're rednecks, and we're keeping the niggers down." But by this point in his career, it's hard to imagine anyone plunking down $50 for a Randy Newman show and not being familiar with his tradition of social satire and untrustworthy narrators.

The proper set ended with "I Think It's Going to Rain Today," what many will agree was his first truly great song. It's the most poem-like song from a writer who excels at telling narratives and character studies, but the song's list of passing images proves how evocative and heartbreaking Newman can be with a few spare words set to a few spare chords.

A three-song encore ended the night with some of his more recent material. "Shame" worked well as an audience sing-along, and "Laugh and Be Happy" and "Feels Like Home" (both from Harps & Angels) closed the show on a warm note.