Review: Rooney and Eisley at the Firebird, Wednesday, February 23

Given the way the audience reacted to Rooney at the Firebird last night, it was only appropriate that guitarist Taylor Locke teased a few Beatles riffs mid-set. Although Rooney thankfully didn't reduce any girls to tears the way the fab four did, the Los Angeles quintet elicited plenty of dancing, screaming and swooning from its predominately young female crowd. For the most part, the group earned the response with a tight show highlighted by Robert Schwartzman's heartfelt, Rivers Cuomo-esque vocals and Locke's stinging solos.

From the show-opening chords of "Blueside," Rooney had the audience right where it wanted them. The band has the same clean, professional-sounding attack on stage as they do in the studio, though the newer Eureka material fortunately gains some edge when divorced from its overproduction. Powered by a strong foundation of new member Brandon Schwartzel's fluid bass lines, Rooney proceeded to unleash an array of melodies as bright as the painted sunset backdrop they played in front of. Singles "I'm Shakin" and "I Can't Get Enough" arrived surprisingly early in the night, but their presence ensured that the group's fans stayed in a frenzy. 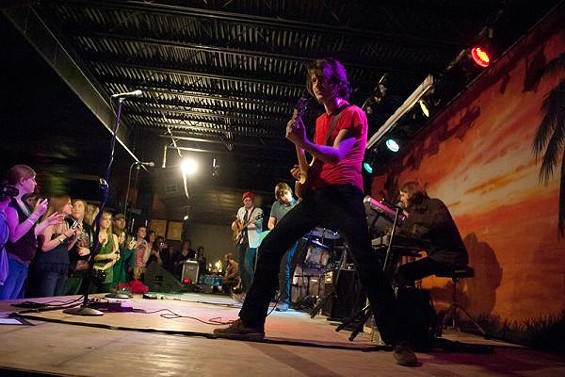 Although the show had been chugging along nicely, things really kicked into high gear during the bouncy Eureka standout "Only Friend." Locke had been tossing off superb short solos throughout the night, but he seemed liberated and enlivened by the chance to take an extended showcase in the song's coda. He's really the perfect lead guitarist for the straightforward pop favored by Rooney in that he has plenty of talent, but never lets his ability to pull off wicked runs overwhelm the song. He is a bit of a stage hog though - during the jam session that broke out during '70s piano-driven tune "Stars and Stripes," Locke took two solos when everyone else besides Schwartzman played one. Overall though, Rooney's concert was a solid team effort that put songs ahead of showmanship. It all culminated in a riveting run-through of the jittery "When Did Your Heart Go Missing?" that brought the set to a close before the band returned for a decent victory lap with "Not In My House."

For all the screaming over Rooney, a number of people came to see opening act Eisley (around 15-25 people left after their set). The Texas five-piece consisting of four siblings played a pleasant set of breezy pop that showcased the DuPree family's great sense of melody and its sisters' pretty harmonies. Unfortunately, for such a vocal-reliant group, the singing was occasionally hard to hear. Perhaps this was due to the fact that the group ran their sound through a set of iPods, and let the channels of the soundboard be monopolized by Rooney and the Old Ceremony. Vocal mixing/projection aside, Eisley hit the mark on its set of dreamy pop, which surprisingly featured only a handful of songs from their upcoming full-length The Valley. But the old favorites helped everything go down easy for a winning set.

With a piano, organ, violin, vibraphone and your usual bass, drums, and guitar setup, The Old Ceremony did actually need all those soundboard channels. Despite all this elaborate instrumentation, the group came off as a sophisticated bar band on stage, with the soulful organ, slightly twangy guitars and the occasional country drum beat betraying the quintet's Chapel Hill, North Carolina roots. The band tended to do best on slower, sometimes bluesy material. In particular, a mysteriously slinky, vibraphone-driven ballad thrilled. However, final song "Papers In Order," proved that The Old Ceremony could also do upbeat material and served as a fine sendoff to a solid opening set.